US President Donald Trump, signed this afternoon a new version of their immigration decree, whose first version had been suspended by the courts. The executive order – which bans citizens from six countries (Iran, Libya, Somalia, Sudan, Syria and Yemen) – is “anti-American”, criticized the Democrat leader in the Senate, Chuck Schumer. 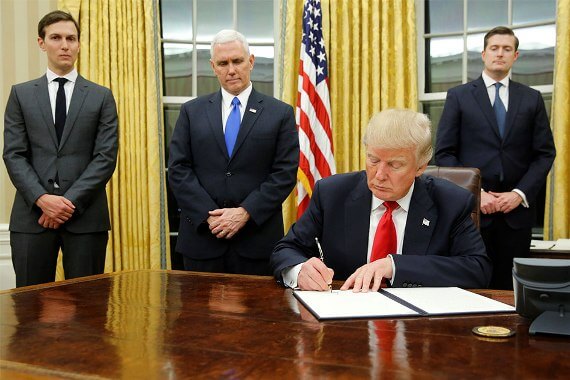 “There is a new decree today”, presidential adviser Kellyanne Conway said earlier in an interview with Fox News, added that it will go into effect on March 16.

The president’s adviser confirmed that legal permanent residents and those who have a valid visa will be excluded from the decree, and also noted that Iraq is out of the list of affected countries.

“Iraq is no longer in the list because of their improvements in the procedures for verification and of their measures of information transmission”, he said.

According to the new text obtained by AP, those people of Sudan, Syria, Iran, Libya, Somalia and Yemen that do not have valid visas currently will not be able to travel to the United States for 90 days.

Recall that Trump’s original order, issued on the 27th January, only prevented citizens from seven Muslim majority countries (Iran, Iraq, Libya, Somalia, Sudan, Syria and Yemen) from entering the United States by 90 days and suspended the United States refugee program for 120 days (in the case of Syrian refugees, that suspension was for an indefinite period).

The resolution was the trigger for the first mass demonstrations against Trump. So much in the airports, where most of the detentions were happening, as well as in landmarks of the country, from Times Square in New York to the White House.

The immigration veto was first stopped by a Seattle judge, and from there moved to the higher court. The San Francisco Court of Appeals upheld the decision in the first instance, which left the Trump government in the dilemma between continue through the judicial process, with the possibility of having to argue their case in front of the Supreme Court, or to give up and re-submit an improved version, which was what finally decided to be done.

Conway did not confirm whether more countries would be included on the veto list. The adviser finally said that the Syrian refugees will now be treated like the other refugees.

2017-03-06
Previous Post: Brad Pitt and an unexpected approach to… Jennifer Aniston!
Next Post: Angela Merkel on the Volkswagen scandal: “I did not know anything”