What the hell Trump and Putin talked about

Apart from Donald Trump, there is only one American person who knows the secret that leads Washington: what the hell did the president and his Russian counterpart, Vladimir Putin, speak on Monday in Helsinki. It was a controversial summit for many reasons and one of them is that they celebrated it alone, with no other witnesses than their respective interpreters. So the American in question is called Marina Gross and is a veteran Russian translator of the State Department whose role would have gone unnoticed in ordinary circumstances. But nothing is ordinary in Trump’s America. 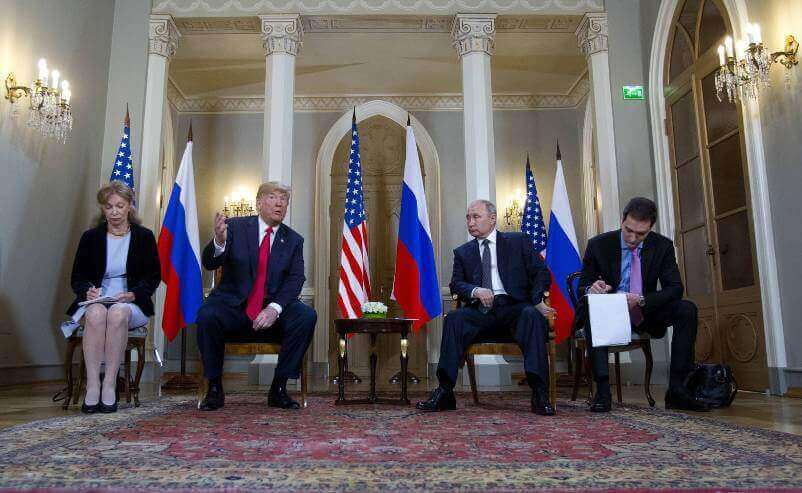 The president’s support for Putin at the press conference after his closed-door meeting caused a stir in the US. Democrats and Republicans threw themselves into criticizing the connivance shown by their leader with the Russian leader whom they accuse of conspiring in their elections, and who gave more credit than their own intelligence services, although two days later it mattered with little fortune. Some people have directly accused him of “betrayal”, such as former CIA director John Brennan. The Democratic Congressional have tried to push a subpoena to force Marina Gross to testify about what happened in that Helsinki room, but conservatives have slowed it down.

The unnoticed power of the interpreters was portrayed very well by Javier Marias in the unforgettable ‘A Heart So White’. The protagonist tells that in the summits or official visits, when what is discussed can be trade agreements, conspiracies against third parties or even declarations of war, there is usually a second security translator who listens and controls that what the entire first translates is a thorough interpretation of what was said by the leader on duty. Although nobody watches the one who watches, because the network would no longer have fine, and there comes a point where the leaders have to trust the translators.

It is not clear from the Helsinki meeting whether each translator, the one from the US Administration and the one from the Russian Government, was responsible for their respective president and if they controlled each other. It is supposed to be, although nothing has transcended.

Democratic Senator Chuck Schumer asked last week if someone, such as Secretary of State, Mike Pompeo, or Defense Minister, Jim Mattis, had been informed of something. “It is totally amazing that nobody knows what was said”, he said. Trumps own National Intelligence Director, Dan Coats, confessed Thursday at a colloquium in Aspen to have no idea. “I do not know what happened in that meeting. I think that as time goes on, and the president has already mentioned some things, we will go on knowing more”, he admitted. It is also unknown if someone recorded the conversation.

The doubts are multiplied by taking into account that the meeting between Trump and Putin was not only marked by the serious accusations by the US against the Kremlin of wanting to interfere in the 2016 presidential elections in order to favor the New Yorker’s victory. It also weighs the investigation of if, in addition, in that stratagem there was conspiring between the surroundings of the republican and Moscow. That is the most destabilizing point of the so-called Russian plot.

How did they deal with the issue of interference? Did they talk about the illegal annexation of Crimea? Of the gas pipeline that will connect with Germany? Of prostitutes? Even the latter is possible. At the beginning of 2017, a report came out of the ex-agent of the British service MI6 Christopher Steele who, based on unvalidated sources, pointed to Trump’s sex videos with prostitutes in Moscow, a material with which the president could be blackmailed, although the FBI discredited him.

His diplomats Putin did give some information about the appointment with Trump and, according to Bloomberg, proposed to the US a referendum to resolve the conflict in eastern Ukraine, but then the US spokesman in the Security Council of the UN, Garrett Marquis, told the Financial Times that the Administration does not raise it.

The greatest transparency occurred when the US president left the meeting saying he saw no reason why Russia “should be [responsible for the electoral interference]”. In A Heart So White, the protagonist, Juan Ranz, decides to overcome the boredom of an anodyne meeting between a high Spanish and a British office altering the meaning of the conversation, but Luisa, the translator who watches (and who ends up falling in love, of course) does not betray you. Trump manufactures his own loss in translation.