Several certified Twitter accounts, including those from Amnesty International, BBC and the French Ministry of Economy, were hacked this Wednesday with messages in Turkish on behalf of Turkish President Recep Tayyip Erdogan and comparing the Netherlands and Germany with the Nazi regime. 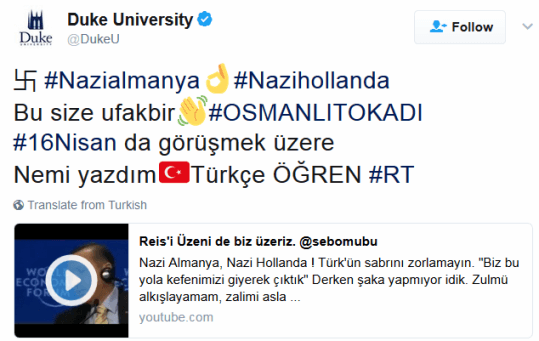 “#Nazi Germany #Holanda Nazis. Here a little Ottoman slap for you #We see you on April 16. Do you want to know what I wrote? Learn Turkish”, a Turkish message said this morning that also appeared in the accounts of Javi Martinez, Who play at Bayern Munich, and former German tennis player Boris Becker, among others.

The date refers to the day of the constitutional referendum in which the Turks will vote if they give all the executive power to the president, currently Erdogan.

The message was accompanied by a videotape of excerpts from a speech by Turkish President Recep Tayyip Erdogan, who approved a constitutional revision to strengthen his powers, which will be submitted to referendum on April 16.

Twitter confirmed to have suffered a major computer attack. “We are aware of the problem that affects several accounts”, said a spokesman for the social network, adding that located “quickly” the source of the attack that comes of an “application”.

“We have withdrawn his permits immediately”, the spokesman said.

The application in question, Twitter Counter, launched by its part an investigation into the attack which was the victim and that allowed this massive hacking, according to AFP president, Omer Ginor.

The French Ministry of Economy confirmed that their Twitter account was pirated. “We have solved the problem”, the ministry said, without giving further details.

For its part, BBC News North America published a message on Twitter in which they stated that “temporarily lost control” of their account on the social network.

Ankara is in full dispute with several European countries, led by Germany and the Netherlands, which forbade Turkish ministers to campaign among the Turkish diaspora in favor of next month’s referendum.

As a result of this conflict, Erdogan warned Holland that “they will pay for it dearly”.

2017-03-15
Previous Post: Scotland announces that they will go for a second referendum to become independent of Great Britain
Next Post: At the end leaked how much Donald Trump paid tax