Russian Ambassador in Turkey, Andrei Karlov, died Monday after being shot by a gunman while inaugurating an exhibition in Ankara, as announced by the Russian Foreign Ministry. 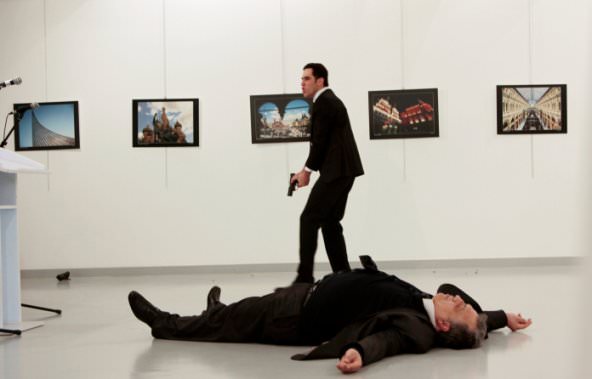 “Today is a tragic day in the history of the Russian Federation; today in Ankara was injured and then died the Russian ambassador Andrei Karlov”, said the spokesman of the Ministry, Maria Zajarova, after the agency RIA Novosti had advanced the news citing police sources.

“We consider what happened as a terrorist attack and we are in contact with the Turkish authorities, who claim that the incident will be thoroughly investigated”, added the spokesman.

Police Special Forces have killed the murderer in a shootout at the Contemporary Art Center, where the exhibition was opening. The Home Ministry of Turkey has confirmed that it is a question of a police officer who was working in Ankara but was out of service.

According to the images of the event broadcast on social networks, the killer is a young man dressed in suit who, after shooting several shots in the back against Karlov, who is inert on the ground, begins to shout in Turkish; in addition to ‘Allahu akbar’ (God is the greatest).

According to the newspaper Hurriyet, the murderer shouted “Do not forget Aleppo! Do not forget Syria! While our brothers are not safe, you will rejoice no security”. “Whoever shares this oppression will pay for it one by one”, he added, according to the English translation. “Only dead will take me from here”, he added.

The exhibition was organized by the Embassy in a cultural center in the capital and had been announced a week earlier, according ‘Hurriyet’, which has stressed that the ambassador escorts do not usually accompany this type of public events.

The murder has taken place one day before the meeting that there are going to maintain the Ministers for Foreign Affairs of Turkey, Mevlut Cavusoglu, Russia, Sergei Lavrov, and Iran, Javad Mohamad Zarif, in Moscow to discuss Syria.

2016-12-19
Previous Post: At least fourteen dead in a shootout in southern Jordan
Next Post: 12 killed and dozens injured in the terror attack in Berlin