Turkish plane falls down with 162 passengers

The bad landing of an airplane was about to end in tragedy Saturday night to Sunday in northern Turkey. The device skidded on the wet asphalt of the airport runway of the rainy Trabzon (Turkish) and slid down a small, earthy cliff until it was run aground a few meters from the sea. The 162 passengers and six crew members were able to leave the plane unharmed, although still shocked by the event. 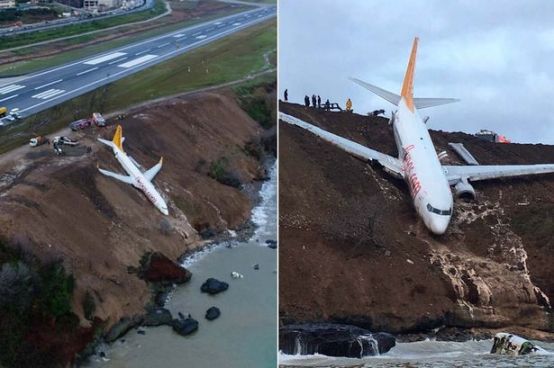 The incident occurred at around 23.30 local time on Saturday. From a witness taken from a car passing by the airport, it is observed how the aircraft, a Boeing 737-800 from the Turkish company Pegasus from Ankara, shortly after taking land, disappears completely as it slithers down the slope.

In a statement, the airline showed its “regret” because one of their aircraft suffered “an incident on the runway” but claimed that it concluded “without loss of life or injury”. However, inside the plane there were scenes of anguish, according to one of the passengers, Fatma Gordu, told the state agency Anadolu: “We started to lean to the side, then the front part sank and the tail lifted. Then there was panic, people shouted and shouted.

The news agency Dogan showed images in which a certain smoke was perceived coming from the interior and in accordance with the passenger after getting stranded along with the sea, inside the aircraft “began to smell gasoline”. “We thought there would be a fire and that’s why we were afraid. There were pregnant women and children. (…) They told us to go out the back door, but people tried to pass one above the other. It was a horrible situation”, Gordu said.

“The first thing that had to be done was to guarantee the safety of the passengers and we have achieved it. There have been some who have gone to the hospital, although in no case for any notable problems, informed the provincial governor of Trebizond, Yucel Yavuz, in statements to Anadolu. The delegation of the Government has opened an investigation to clarify the causes of the accident and the Provincial Prosecutor’s Office has initiated criminal investigations in a separate case.

The airport was closed all night, but in the morning it was operational once the dragging of the plane was completed. This required three tugboats that, under the supervision of the firefighters and the Coast Guard, pulled the device to extract it from the plane and put it safely.

2018-01-15
Previous Post: Google’s assistant for the car arrives to compete against Amazon’s Alexa
Next Post: A scientific team cools water up to 43 degree below zero without freezing it