The top executive of US oil company ExxonMobil, Rex Tillerson, has been chosen by President-elect Donald Trump to become the next secretary of state, according to various media. 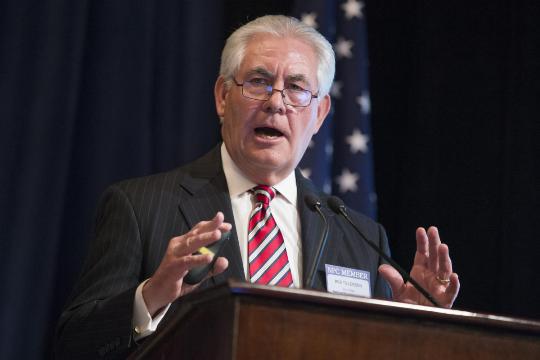 Trump announced that the appointment of the most important post in his future cabinet will be revealed early on Tuesday, but this same night sources of the presidential transition team confirmed that the chosen will be Tillerson.

Neither Trump nor Presidential Transition Team had confirmed tonight the designation through the usual channels, but the chances of Tillerson increased in the last few hours after the announcement that was outside one of the favorites.

Former Republican presidential candidate Mitt Romney ruled out tonight that will become the next secretary of state, a set of aspirations that had fueled both Trump and Vice President-elect Mike Pence.

“It was an honor to be considered for secretary of state of our great country”, Romney said in a message on the Facebook network. “I have high hopes that the new administration will lead the nation into a stronger position, with prosperity and peace”, added the the Republican politician.

Romney maintained strong rivalries with Trump during the last electoral campaign, and came to exchange harsh criticism, but the two politicians have met twice since the presidential elections of 8th November for filing roughness. These past criticisms have become mutual praise, but ultimately Romney will not add to the future administration of Trump.

He was also mentioned as a candidate for the State Secretariat for former New York Mayor Rudy Giuliani, who acted as an advisor to Trump during the election campaign and even accompanied him to a controversial visit to Mexico. However, last week the same Trump announced that Giuliani had requested not be considered for any government post because he wanted to concentrate on his private legal consultancy business.

According to The Washington Post and other local media, Tillerson faces a difficult task in the Senate to ratify as the next Secretary of State if he is eventually chosen for the post. His relations with Russian President Vladimir Putin and his operations in that country and in nations of the Middle East at the head of ExxonMobil will be analyzed closely by legislators before approving his appointment.

According to the Post, a growing number of Republican senators have been reluctant to confirm Tillerson, 64 year old and in front of the main US oil company since 2006.