Trump says relationship with UK is ‘stronger than ever’

Donald Trump, the US president, said Friday that the relationship between his country and the United Kingdom is “stronger than ever” thanks in part to his affinity with the British Prime Minister, Theresa May. 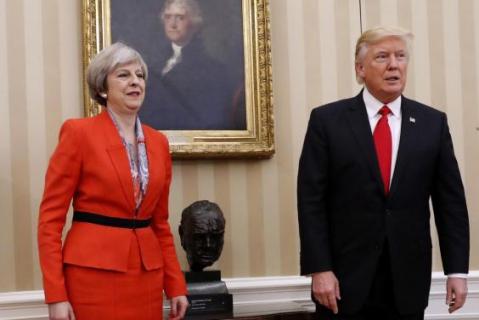 “The free and independent United Kingdom is a blessing for the world and our relation has never been stronger”, said Trump during a joint press conference with British Prime Minister, in the first official visit by a foreign leader received in the White House since his inauguration on 20 January.

After the meeting, Theresa May has congratulated Donald Trump for “stunning election victory” and stressed that the meeting “is a sign of the strength and importance of this special relationship between our two countries”.

Among the issues that have tried during his first official meeting, British Prime Minister said that both countries support NATO “100%”, despite the many criticisms that have issued on the transatlantic alliance. Trump said during the election campaign that NATO was “obsolete”, and a few weeks ago he repeated that opinion during two interviews with European media.

“We are united in our recognition of NATO as the bastion of our collective defense, and today we have reaffirmed our unwavering commitment to this partnership”, stressed Theresa May.

In this regard, the British prime minister has cited foreign policy and joint efforts to end the jihadist group Islamic State (IS) in Syria, Iraq and radical Islam.

Meanwhile, Trump has assured that while he defends the use of torture in interrogations of terrorism suspects, he let his secretary of defense, who opposes the tactic, make the decision on whether or not to take it up.

On the other hand, the president of the United States has said it is still “early” to talk about the possibility that his country lift the sanctions on Russia, while British Prime Minister, Theresa May, has considered that economic sanctions to Moscow “must continue”.

Likewise, British Prime Minister has confirmed that Trump has accepted an invitation of Queen Elizabeth II to visit the UK in the near future.

2017-01-27
Previous Post: The operation ends in the Rigopiano: 29 dead; 11 survivors
Next Post: A judge blocks part of the veto of Trump to Muslim citizens