The elected President of the United States, Donald Trump lashed out this weekend against Democratic congressman from Georgia and leader of civil right, John Lewis, after he ensure that the billionaire “is not a legitimate president” given Russian interference in the presidential elections on 8th November. 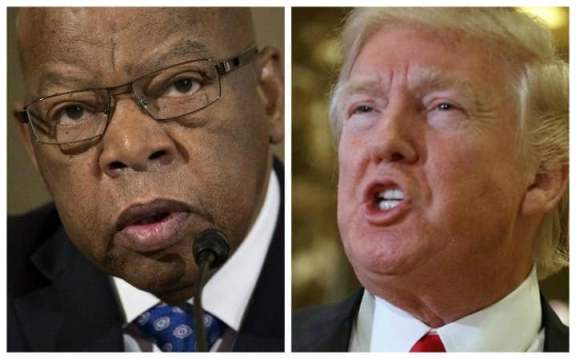 “I think that the Russians participated in helping this man turned out elect and help destroy the candidacy of Hillary Clinton”, Lewis said Saturday, who announced he will not attend the inauguration of President Trump. “It will be the first time I won’t since that I am in Congress”, explained this Afro-American Congressman.

As expected, Trump reacted on Twitter. “Congressman John Lewis should spend more time on fixing the horrible situation in his district, which is sinking (not to mention that it is infectious crime) rather than complain falsely by the election results. It’s all talk, talk, talk. There is no action or results. Sad”, Trump tweeted.

Lewis, Martin Luther King mate, is considered one of the leaders of the civil right of the United States. During the 60s, the congressman was constantly arrested and beaten by police in protests for civil rights. Lewis was one of the victims of the so-called “Bloody Sunday” of 1965 in Selma, Alabama, where the police repressed with bludgeons and tear gas a march to demand the right to vote and prevented them from crossing the bridge.

“Donald Trump has attacked me on Twitter. He says I’m ‘all talk’ and ‘no action’. I suffered bloody beatings, I was attacked with tear gas, fighting for what was right for America. Sometimes that’s what needs to be done to get our country moving in the right direction”, Lewis recalled in an email he sent Saturday asking for donations to the Democratic Party to continue fighting during Trump’s four-year presidency.

“We refuse to stop now. We’re not done fighting for progress. We are ready to fight another four years”, Lewis added.

Web-based responses against the president-elect have not been expected, because of the relevance that Lewis has had to defend civil right against racial segregation, being one of six leaders of the Freedom Riders in the 1960s, movement which inspired Martin Luther King.

Another major political consultant, David Axelrod, added: “I disagree with what Lewis said, but I am honored by the man who is integrity and courage-qualities that you just cannot afford”.

The congressman said Sunday he will not invite Trump to visit Selma, but he cannot stop him from going. “If you go to Selma”, like Presidents Bush, Clinton and Obama, “maybe I can learn something”, the civil right leader said in an interview with NBC. This Congressman accompanied President Barack Obama in March 2015 to commemorate the 50th anniversary of the Selma March.

2017-01-15
Previous Post: US fined Moody’s with $864 million to inflate junk mortgages
Next Post: Five killed in a shootout in Mexico at a party