Apprised for covering the role of White House National Security Advisor, US President Donald Trump reaffirmed that he has four candidates who could become the successor to Michael Flynn, the retired general who resigned and became the first casualty of the Trump government with only 24 days in office. 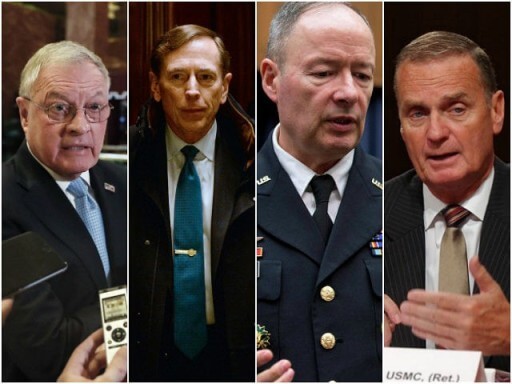 After a political act similar to those of the election campaign and a weekend in his Florida private club, President Donald Trump returned to his offices in Washington and held meetings with the nominees. Among the candidates were his interim adviser, retired Army Lt. Gen. Keith Kellogg; John Bolton, former ambassador to the United Nations; Army Lieutenant General H.R. McMaster; and the superintendent of the West Point Military Academy, Lieutenant General Robert Caslen.

In statements to journalists in the plane Air Force One, Trump said there were “many, many who want the job” and hinted that he had a favorite to cover it. “I will make a decision in the next few days. I’ve been thinking of someone the last three or four days, we’ll see what happens”, Trump said. “I will meet that person. They are all good, they are all great people”.

White House spokesman Sean Spicer said there could be more meetings before naming Flynn’s replacement after his departure earlier in the week. He added that “other names could be considered for the job”, although he clarified that David Petraeus, the retired general and former CIA director, was not one of the candidates.

In his first weeks in the White House, Trump had to face the difficulties of confirming his nominees to the government and an almost constant flow of reports on internal problems in his administration. Flynn’s resignation was another setback. At Trump’s request, Flynn stepped down as National Security Advisor on Monday after revelations that he had contacted the Russian ambassador even before joining the government and that he had lied to Vice President Mike Pence about those talks.

On Thursday during a hectic press conference, Trump said he was disappointed by the way Flynn had treated Pence, but added that he did not think he had done anything wrong in maintaining those contacts.

Trump’s first choice to replace Flynn was retired Vice Admiral Robert Harward, who declined to offer for “financial and family commitments”, he said in a statement.

Of the four names on Trump’s list, McMaster and Caslen are the top candidates, according to The New York Times.

H.R. McMaster considered one of the most important military intellectuals. He was critical of the way in which the Bush Administration went to war with Iraq and became a key thinker behind the change in strategy that helped to turn the war.

The General Robert Caslen served in key roles in Iraq and Afghanistan. A graduate of West Point, he took the leadership of the military academy in 2013.

Trump’s acting advisor Keith Kellogg served for 26 years in the Armed Forces, including two opportunities in Vietnam. He advised Trump on foreign policy during his campaign and was appointed Chief of Cabinet at the National Security Council.

The last of the names and the only one not coming from the military wing is John Bolton, who is a conservative favorite, but an opponent of the Democrats who blocked him from being confirmed as United Nations ambassador. Bolton shares with Trump a strong antipathy to the nuclear pact with Iran that the president of that time Barack Obama negotiated in the year 2015.

2017-02-19
Previous Post: At least 48 killed by a car bomb in a new attack in Baghdad
Next Post: Barcelona rescued a dying victory with two goals from Lionel Messi