The reasons why Federer can snatch the number 1 to Nadal

When in late January Roger Federer won his 19th Grand Slam title in Australia, many of his fans began to look forward to seeing him again as number one. Over the months, it began to seem more and more possible. And after his victory against Rafael Nadal in the final of the Shanghai Masters by 6-4 and 6-3, he was very close to snatching the number one. 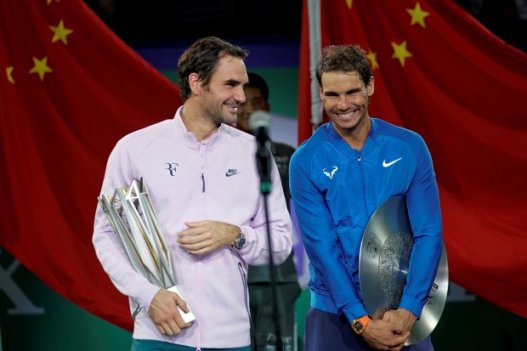 There are plenty of reasons for Federer to achieve that goal: the last tournaments of the year, on hard courts under the roof, are those that best fit the tennis of the Swiss, second of the ranking, and those that do worse to the joints of Nadal; Roger is solid, confident and playing on a superlative level; and Rafa, who suffered discomfort in his right knee yesterday, questioned his presence in Basel and Paris Masters, the last stops before the London Masters. The struggle for the one is open and his Majesty seems ready to retrieve it.

The title of Shanghai came to ratify an undeniable reality: in 2017, Federer became the “black beast” of Nadal. Although the Spaniard leads the record against each other with 23 wins in 38 games, the Swiss won all the four matches this season final, Australia and Miami and the eighth Indian Wells of yesterday-and the last five, if not also the final of Basel 2015.

That streak seems to have a simple reason. “I have less fear of confronting Rafa than I could have in the past. It does not mean that I had a terrible fear, but now when I face him I know how to play with him”, explained the Swiss, who reached 27 festivities in Masters, three fewer than Nadal and Novak Djokovic, top winners in this tournament category.

And if that confidence is added to the high-level tennis that is playing, the result is a match like the one that occurred on Shanghai cement. Because Nadal was diminished by the discomfort in the knees, Federer was unstoppable, made the most of the conditions of the field – the fastest of all Masters – and dominated the match from the beginning.

“I did not want to talk about that, but I do not know if I will play there, I have to think about it”, he said. “He played very well”, admitted the Spaniard, who could get out of the tournament in Basel if the knee wondered. Uncertain scenario, Federer could take advantage to regain the number one, which he last held in October 2012.

Yesterday’s victory, which gave him the 94th title of his career, allowed Roger to reduce the point’s difference with Nadal to 1,960, with 3,000 remaining between Basel, Paris and the London Masters.

If in the next two weeks, the results are to be formulated by Federer – the Swiss champion in the country and in the French capital and Rafa with bad results in the two tournaments – Roger would arrive at the London event with concrete possibilities to climb to the top. Although he should also make a great tournament in that contest to return to lead the ranking. It will be difficult, but his great moment gives him reasons to hope.

It is that the Swiss took full advantage of the rest that was taken last year, when he closed his season after Wimbledon to give time to his left knee to heal well. During the match, he improved a tennis that seemed unbeatable – “I am more solid with the service and I have more power with the backhand”, he said yesterday – and was strengthened physically. And he came back refreshed.

Of course, two of his great rivals, Djokovic and Andy Murray, shortened their seasons by injury. But Federer showed in the tournaments that he played a level perhaps even better than his best years and was one of the great protagonists of the circuit with Nadal.

The Swiss showed on the court throughout the year that at age 36 his physique is intact, his racket still has a lot of tennis to give away and his talent is still as extraordinary as ever. That is why the dream of seeing him again in the highest rank is no longer a dream. And it could come true before the season ends, to the joy of a tennis world that never tires of enjoying it.

2017-10-16
Previous Post: The World’s Largest Ice Caves
Next Post: United States “does not rule out” direct talks with North Korea