The opposition declared winner in the Malaysian elections

The leader of the Malaysian opposition, former Prime Minister Mahathir Mohamad, has assured that his coalition, Pakatan Harapan (PH), has obtained the victory in the elections that the Asian country celebrated on Wednesday. The nonagenarian Mahathir, who has accused the ruling coalition of “deliberately delaying” the results because “he does not want to acknowledge his defeat”, would give the country a historic turnaround: it would be the opposition’s first victory since independence in 1957. 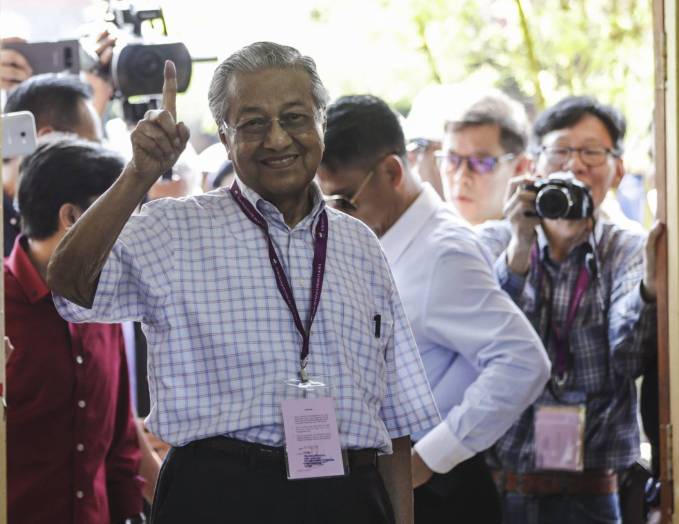 “We are about to be able to form a government”, Mahathir said in an appearance at dawn on Thursday, in which he denounced that, although the counts have been completed in most districts, the Electoral Commission is reluctant to sign the minutes. The last poll, published by Malaysian media, gives 102 seats to PH, 68 to Barisan Nasional (BN), the government coalition, 16 to PAS (Islamic Pan-Malaysia Party) and 2 to other parties. Only 34 would be needed to complete the total of 222.

If the result is confirmed, Malaysia would shelve more than six decades of uninterrupted government of the National Organization of the United Malays (UMNO). It would be the farewell of Prime Minister Najib Razak, in power since 2009, and would mean the return of Mahathir fifteen years after he finished his twenty-two year term, the longest in the history of the country. Mahathir, formerly in the ranks of UMNO, decided to head Pakatan Harapan to face Najib, once his disciple, due to the corruption scandal that broke out in 2015: about 681 million dollars, out of a total of 2,600 embezzled from the state fund 1Malaysia Development Berhad (1MDB), supposedly ended up in private accounts of Najib.

Mahathir has vowed to delegate power within two years to Anwar Ibrahim, who is serving his second sentence for sodomy, a crime in the Muslim country. The first was imposed in 1999 when he was Deputy Prime Minister of Mahathir himself and his popularity increased; the second, in 2015, after advancing positions in front of Najib as leader of the opposition in the 2013 elections.

It is estimated that the “Y” generation – those under 40, almost half of the nearly 15 million voters – would have been key in Mahathir’s victory. In urban areas such as Kampung Pandan Dalam, the traditional stronghold of the opposition, there was an air of change and the division of the most disputed elections in Malaysia since the opening of the polling stations at 8.00 local time.

Mohammad, Hanif and Qalam taste their bowls of laksa (noodles cooked in fish soup) and lemon tea with ice after voting in that district. But the table does not talk about politics. “We prefer not to tell us who we voted for”, says Mohammad, anticipating possible disagreement.

With the ink to record the vote still fresh on their thumbs, the three men, between 32 and 38 years old, get carried away between bites and their preferences end up coming to light. “We need a leader who does not make it difficult for people, who is not corrupt”, says Mohammad, who speaks positively of the PAS, seen by many with suspicion because his program includes the implementation of sharia (Islamic law) in the country, of Muslim majority (more than 60%) and moderate tradition.

“I choose the candidate I know best, not the party. Religion in the background does not matter, we do not want to be racist”, he says. Qalam, the youngest-looking, shakes his head and raises his thumb in approval as he appoints Pakatan Harapan (PH), Mahathir’s coalition. Hanif, handkerchief in the head and smiling look, smiles silently under the awning in which they shelter from the suffocating heat with which Kuala Lumpur has celebrated its election day.

A heat that has not deterred the population from taking to the streets from the first hour to deposit their vote. The final counts indicated a participation of more than 70 percent, below 85 percent of the 2013 elections.

The different areas of the Malaysian capital vividly represent the ethnic and religious melting pot of the country, with 69 percent of the population of Malaya, mainly Muslim, 24% of Chinese origin and 7% Indian. In Kampung Cheras Baru, a neighborhood east of Kampung Pandan in which PAS triumphed in the 2013 elections; more hijabs (the Muslim veil) are perceived among women and more elderly among voters. The reasons for choosing a candidate are similar to those of the neighboring area: economy and religion. “Our PAS leader takes care of people, not of himself. It is the best option for everyone, not just the Muslims”, says Abdul Aziz, 34, on quitting voting. “The others (for Najib and Mahathir) are good Muslims, but not good leaders”, he says.

The tonic varies in the district of Taman Shamelin Perkasa, further west and mixed population. “Almost 50 percent of us are of Chinese origin”, says retired Robert Chin. The sexagenarian is clear about it. “What people want is a change. (Najib) has been in power for too long. And when he felt that he was beginning to lose, he has dedicated himself to buying votes and business. Mahathir is not the panacea, but if you compare them, it comes out winning”, says the ex-banker.

Before beginning to know the results, the most festive atmosphere of the electoral day was in Kampung Baru, bastion of Najib. In the neighborhood of humble low houses in front of the financial heart of the city, with the emblematic Petronas Towers crowning the landscape in the background, Ismail Sahat protects himself from the sun under an umbrella of Barisan Nasional and triumphantly salutes pedestrians. “I will continue to vote for BN because he has done a very good job. He has served our community for years, giving us what we need”, he says, in contrast to those who accuse the prime minister of having raised the cost of daily life in the country, which continues to grow around 5 percent annually.

A short distance and flanked by just two companions, Jamila has no qualms about waving their flags of Pakatan Harapan and challenge the neighbors who are going to vote. “I’ve walked house by house in the neighborhood to convince the voters. Last night. And believe me, we have possibilities”, the woman whispers, claiming that she has recently withdrawn her support for the Najib party. An omen that can, hours later, become a reality.