The operation ends in the Rigopiano: 29 dead; 11 survivors

Italian rescue teams have completed the rescue operation started around last Wednesday night after a big avalanche was burying under the snow of the Rigopiano hotel in the Farindola town, in the region of Abruzzo. 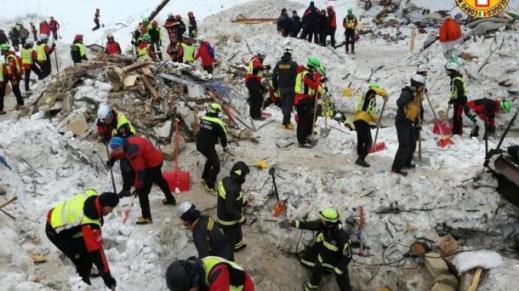 The final balance after the operation is, however, tragedy: 29 bodies have been extracted from the building and 11 survivors (two of them rescued out of the complex). Specifically, it is 15 men and 11 women, although so far only been identified 20 of them, as indicated by various Italian media.

Two of the 11 survivors came out Wednesday to the press and said that no one had “warned them of avalanche danger” and confirmed that the guests, “very frightened”, waited “in the lobby for the arrival of the snowplow” in order to leave the place.

“When the earthquakes happened, we were all very frightened and we gathered in the lobby to wait for the snowplow,” one of them recalled. “No one warned us of the avalanche danger, we thought it was a very strong earthquake,” he added.

The couple spent more than 50 hours trapped until they were rescued on Friday by emergency crews.

Now the Prosecutor office is currently investigating the sequence of events, to clarify how the authorities responded to the alert, as mentioned an email from the hotel manager the evening of Wednesday asking for help, which was ignored for several hours. In addition, the snowplough that is supposed had to clear the route was going “five months getting ready”, according denounced some political exponents. Also, there have been more than 100.000 persons who have stayed for 3-4 days without electricity.

The avalanche that left the luxury hotel trapped under snow believed to have been caused by the earthquakes that hit central Italy on Wednesday, 18th January. There were four earthquakes greater than magnitude 5 on the Richter scale, in less than 24 hours.

2017-01-26
Previous Post: At least 28 dead in attack on hotel in Mogadishu
Next Post: Trump says relationship with UK is ‘stronger than ever’