Israeli Prime Minister Benjamin Netanyahu remained under pressure on Sunday after eight people died during the weekend in clashes over new security measures imposed in the Jerusalem’s Holy Esplanade.

Israeli officials said they were open to modifying security measures enacted on the Esplanade (known as the Temple Mount by the Jews), at which Israel installed metal detectors after two Israeli policemen were killed in an attack near there on 14th July. 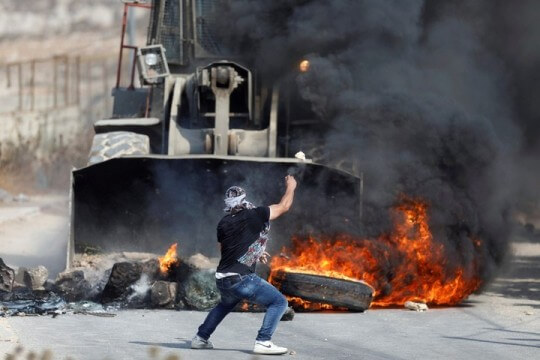 The measure at this delicate point in Jerusalem, considered the third holy place of Islam and the holiest site of Judaism, provoked the anger of the Palestinians.

“Security officials have recommended the measures to be taken, we will decide accordingly,” Netanyahu said Sunday before meeting with his cabinet. Later, he planned to do so with his security cabinet.

This Sunday, in one of the accesses (which were still counting on the detectors) had installed some security cameras, which could be an alternative.

Israeli General Yoav Mordechai, the head of COGAT, the Ministry of Defence agency responsible for civilians in the Palestinian territories, said changes could be made to security policy.

“We are looking at other options and alternatives that can ensure security,” Mordechai said in an interview with Al Jazeera.

The Ministry of Public Security, Gilad Erdan said he would continue to advocate for metal detectors until a satisfactory alternative is found.

Arab League Secretary-General, Ahmed Aboul Gheit, accused Israel on Sunday in a statement of “playing with fire” with its security measures and warned that “no Muslim will accept anyone to violate” their holy places, recalling that Jerusalem “is a red line”.

The crisis has come to an international level. The UN Security Council will hold a closed-door meeting on Monday on the increase of violence in Israel after Egypt, France and Sweden requested a meeting to “urgently address how to support calls for a de-escalation of violence in Israel. Jerusalem”.

Tensions have been mounting as a result of the installation of the detectors at the Esplanade, which houses the Al Aqsa mosque and Dome of the Rock, after the attack of 14th July.

Palestinians reject security arches because they interpret the measure as a movement by Israel to increase its control on the spot. As a protest, they refused to pray in the compound and have been praying in the surrounding streets. 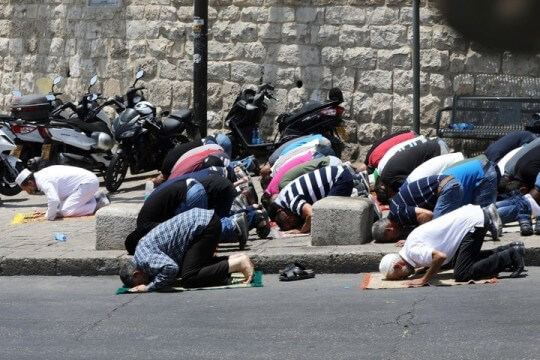 The Israeli authorities claim that the attackers of July 14 had hidden weapons in the esplanade of the mosques and that they left there before firing at the police.

On Friday, Israel vetoed the entrance to the men under 50 years into the Old City.

Clashes erupted between Israeli and Palestinian security forces around the Old City and other parts of East Jerusalem, annexed by Israel, as well as in the occupied West Bank, leaving three Palestinians dead.

On Friday night, a Palestinian broke into a house in a Jewish colony in the West Bank and stabbed four Israelis, killing three of them.

On Saturday, new shocks occurred. Palestinian youths threw stones and Molotov cocktails when the Israeli army used a crane to block the attacker’s village in the West Bank.

That day, clashes were also reported in East Jerusalem and other Palestinian towns, according to police. Two Palestinians were killed during clashes.

On the other hand, the Israeli security forces reported on Sunday the arrest of 25 members of the Islamist movement Hamas, which governs in the Gaza Strip.

The arrests were carried out in the West Bank, according to a statement from Israel’s internal security agency as a precautionary measure after “tensions around the Temple Mount”.

In addition, a missile fired this Sunday from the Gaza Strip to Israel exploded in full flight, the Israeli military said, without causing any damage. No Palestinian group claimed the launch.

2017-07-23
Previous Post: Eight found dead in a truck in Texas
Next Post: North Korea demands US to “bow down and ask for forgiveness”