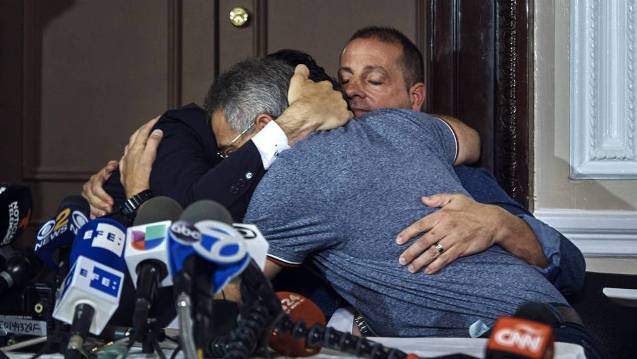 Ariel Benvenuto, Ivan Brajkovic, Juan Pablo Trevisan and Guillermo Banchini send a message to the world in motion: “Love has brought us here and that love will continue to unite us”. They are four of the five Argentines who survived the massive hit on Tuesday in New York. They were biking down the green trail that runs along the Hudson River in western Manhattan. In the place where they lost their five high school friends, a shirt of the Argentine national team with the ten names of the group hangs.

“If there is a place we did not want to be this is”, Bianchini started his heartbreaking speech before the press, “if there is a text that we would not have written is this. And here we are, full of pain”. The Argentine, who spoke on behalf of his friends, said there is no way to understand that innocent lives are taken away in this way, “the dream became the worst nightmare”. The feeling and experience they are passing through are, he said, “non-transferable”.

“We have survived”, Bianchini declared, “And we have seen our friends leave”. Tuesday Halloween was a splendid day in Manhattan, like the fateful 9/11s. The terrorist attack took place a few blocks from the Liberty Tower and the memorial to the victims of the attack on the Twin Towers. The bike lane that passes next to Ground Zero is a very popular area for sports enthusiasts, employees of the financial district and tourists.

“In what has the world changed? How can anyone think of how to execute such an act?”, He wondered, while asking for justice to be done so that something like that will not be repeated here or anywhere else in the world. Despite this blow, Bianchini made it clear that everyone is convinced that “the way to inhabit this world is what we have learned from children”. “Love beats hatred, life beats death”, he pleaded.

The survivors of the attack waited for the families of their deceased friends to come and give them shelter. The meeting was intense, full of conflicting feelings, as reported by the Argentine Consul General Mateo Estreme. “The loved one for all of them was not there”, he said. They were the ones who also counted Martin Ludovico Marro, admitted with multiple fractures, what happened.

The people of Rosario traveled to New York to celebrate 30 years of graduation from the Polytechnic Institute Superior General San Martin. “Friendship is a feature of Argentine culture”, said Bianchini, “we arrived here driven by that feeling that had formed in our youth and that always accompanied us”. They were a family. “I have no words to express my admiration, for the way they are facing this moment”, the consul valued, “they are heroes”.

The process of repatriation of the bodies of Ariel Erlij, Hernan Diego Mendoza, Diego Enrique Angelini, Alejandro Damian Pagnucco and Hernan Ferruchi is closed with the local authorities, so that the flight back to Argentina can be made as soon as possible and therefore their darlings in Rosario can begin the duel. The diplomat explained that the intention is to do it on Sunday night.

The four survivors, on behalf of the families, thanked the city of New York for the solidarity and support they received in this moment of anguish, as well as the expressions of affection from all over the world. Mayor Bill de Blasio, in a press conference with police officials, reiterated that Tuesday’s attack “will not change who we are” and said that the celebration of the marathon will be a great occasion to prove it.

2017-11-04
Previous Post: Putin’s visit to Tehran underlines the Russian-Iranian rapprochement with the United States
Next Post: Learn how to throw a slider