Selena Gomez and The Weekend: New Romance in Door

Selena Gomez was spotted giving hugs and kisses with singer Abel Tesfaye better known as The Weekend on Tuesday night January 10, outside the restaurant Giorgio Baldi in Santa Monica, USA. 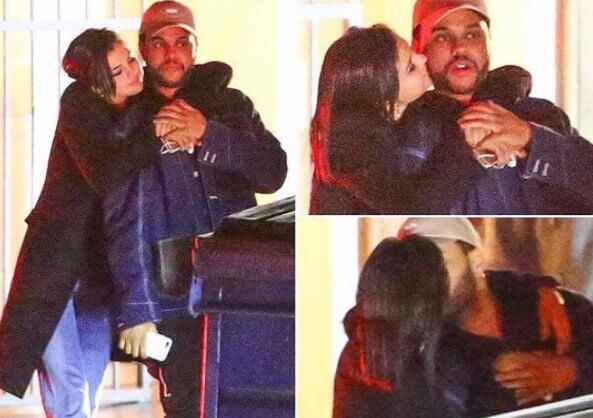 Selena Gomez and The Weekend was seen leaving the restaurant very lovey-dovey, they were holding hands and giving signs of affection, not bothering to hide that they were together. It is not known how long they have been dating or when this relationship began, but the photos taken show that there is a new romance.

The artist has not wasted time. In November, Hadid and he ended their relationship after year and half together. Apparently, the reason they gave both was by incompatibility of agendas. However, they continue to love each other and are friends. They still feel a huge love for each other, confess close friends to the ex-couple.

According to TMZ, who published the pictures; Selena and Gigi Hadid both are friends, which could generate some drama in this new novel. Although Hadid seems upset with the decision of the singer and has taken the decision to stop following Selena Gomez on social networks.

But for Selena Gomez it is also time to turn the page, leaving behind her erratic and passionate relationship with Justin Bieber, who serenades and photographs between networks showed that their relationship did not end. Selena also decided to leave behind her brief relationship with actor Orlando Bloom with whom she was linked by a short time.

Selena had a tough time in 2016, when she was admitted to a rehabilitation clinic to deal with emotional problems and her disease, lupus, a disease of the immune system; for which he had to receive chemotherapy sessions.

This difficult phase of the singer made her take a step back from the spotlight and account in Instagram, where has the profile with more and more followers. It is likely that this time of change helped the singer to resolve her emotional conflicts and led to a change of style.

The truth is that these photographs that have come to light their romantic dinner speak for themselves, making Selena Gomez and The Weekend as the new partner of this 2017.