The Russian President Vladimir Putin has ordered a “humanitarian pause” five hours each day and the creation of a “humanitarian corridor” to allow civilians to leave the region besieged Ghouta Oriental rebel stronghold located outside the Syrian capital, Sergey Shoygu, said on Monday in Moscow. It is the second ceasefire announced in the last 48 hours after the UN Security Council approved on Saturday a resolution to implement a truce of at least 30 days throughout the Syrian territory. 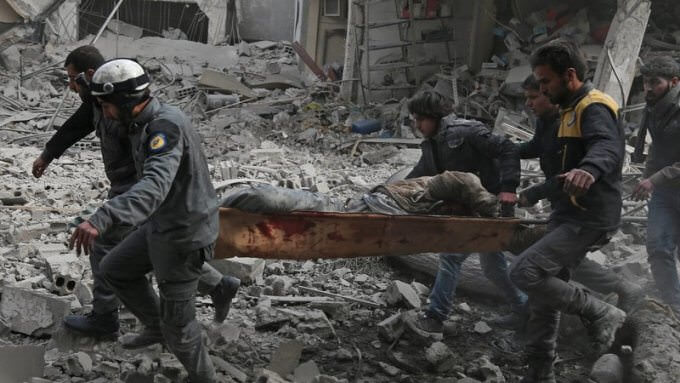 The so far invisible truces are intended to curb the air offensive launched by the Syrian Army on East Ghouta that since last Sunday has claimed the lives of more than 520 people and injured another 2,500, according to data from Doctors Without Borders.

“We do not dare to leave because the airplanes keep hitting”, says Diala H. from the basement of a neighborhood in Ghouta where 15 families have been gathering in the dark for a week. On the other side of the fence the mortar rain coming from these insurgent suburbs has claimed the lives of more than 70 civilians and injured more than 200 in the slums of the Syrian capital. Although local activists said on Sunday a reduction in the intensity of both bombings and mortars, every day that passes weighs on the drastic medical situation and famine that plagues the between 250,000 and 400,000 civilians (according to sources) trapped in the largest rebel enclave on the periphery of Damascus.

Both announced truces have met with the brake of the regional powers on a progressively internationalized meeting after nearly seven years of war. Ankara has said it will continue its offensive against the Kurds in the northern Afrin enclave. While Mohammad Bagheri, the head of the Iranian Army and whose militias represent a significant ground support for Syrian regular troops, has excluded Ghouta from the national ceasefire. However, Shoigu has stated that there should be similar “breaks” in the border region of Al-Tanf and in Rukban, near the border with Jordan, “in such a way that civilians can return to their homes without hindrance and begin to rebuild their lives as civilians”.

The date of implementation of the ceasefire, as well as the armed groups that have to be excluded due to their links with terrorist groups, have once again entailed the main stumbling blocks of the negotiations. A stage that refers to the negotiations organized in Astana to delimit four distension areas in the country, today partially invalidated by the rebound of the fighting. Semantics are imposed on the Ghouta front for the regular Syrian troops and their allies who, represented by Moscow, have demanded to exclude from the ceasefire “terrorist organizations of the Islamic State and Al Qaeda and their allies”. Both Iran and Damascus consider the Islamist factions that control Ghouta Oriental allies of the Al Qaeda affiliate in Syria.

The international mediation forced against the clock by the UN comes after almost five years of siege in Ghouta during which the repeated attempts of negotiations between armed insurgent groups and the Syrian regular army have fallen on deaf ears. And with it, condemned the civil population to a double rebellious and loyal fence. Between 2,000 and 6,000 Islamist fighters are entrenched in the nearly 100 km of the besieged Ghouta, which both the Human Rights Watch and Amnesty International organization have accused of perpetrating war crimes against civilians. Jaysh al-Islam (backed by Riyadh) and Faylaq al-Rahman (backed by Doha and ally of the local branch of Al Qaeda in the area) are the main Islamist forces that have gathered months ago to control the dozen of populations constituting Ghouta Oriental, they have announced this week a united front in response to the offensive of Syrian aviation.

For its part, the Syrian interim opposition government released a statement on Monday denouncing an attack that killed a child and injured 18 people “who had symptoms that correspond to exposure to chlorine gas”. According to the offensive on Ghouta, several fronts have been reactivated by forces loyal to Damascus and armed insurgent groups in the provinces of Hama, Homs and Idlib, while in the east of the country, the Syrian Observatory for Human Rights denounced on Monday the death of 25 civilians under a bombing of the international Coalition led by the United States.