One of the black boxes of Russian military plane that crashed Sunday in the Black Sea has been found, as reported by the TASS news agency quoted the Ministry of Defence. 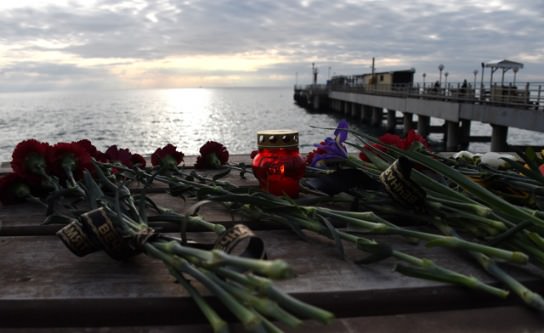 “At first glance, the registrar is in good shape”, a source of command of the search operations told the Interfax news agency. He added that the second “black box” of the Tu-154 was already been located and is expected to be rise to the surface throughout the day.

Until this morning, according to Interfax, they had been recovered 13 bodies and nearly 160 fragments of bodies.

The statement reveals that the box containing the flight information and with which they could identify the cause of the accident, will be sent to Moscow for analysis. The investigations point for the time being that or an error of the pilot or a technical mistake were the causes that provoked the fatal accident in that 92 persons died, including many of the famous choir of the Red Army.

In fact, the plane was carrying dozens of singers and dancers of the choir to Syria to entertain the Russian troops in the New Year. The Tu-154, which came from Moscow, crashed minutes after takeoff from the Sochi airport on the Black Sea, where had made scale for refueling.

Following the accident, the Russian government has decided to halt all flights of the Tupolev-154 aircraft until it is clear what happened with the damaged aircraft on Sunday, according to Interfax.