A plane with 71 passengers – 67 passengers and four crew – of the Bangladeshi airline US Bangla has crashed on Monday while performing the landing maneuvers at Kathmandu airport, the capital of Nepal. Police authorities have confirmed at least 49 fatalities – in an earlier version the police reported 50 deaths – and 22 injured some in critical condition, who have been transferred to several hospitals in the city. 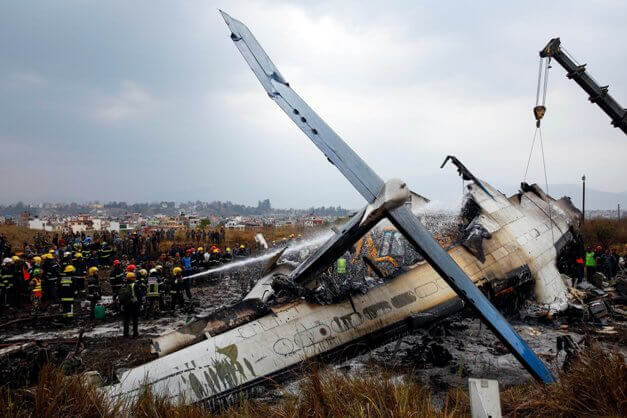 The plane came from Dhaka, capital of Bangladesh, and has suffered the accident in the Nepali city at 14.20 local time. The aircraft was carrying 37 men, 27 women and two children of various nationalities (44 Bangladeshi passengers, 25 Nepalis, one Chinese and another Maldivian).

“Those of us who were sitting near [the window] could escape, we helped each other before the fire spread, we could jump in front of the fire, we heard people shouting”, said Aashish Ranjit, one of the survivors. Ranjit, who suffers cuts in the hands and head, has narrated how he lost consciousness after hearing a loud blow.

The plane had just landed when it had left the runway to skid on a football field, 300 meters from the airport, as reported by the spokesman of the Tribhuvan International Airport (TIA), Prem Nath Thakur. “We are trying to control the fire, the police and the army are trying to cut part of the plane to rescue more travelers”, said the spokesman. The control tower asked the pilot to enter the south side of the airport – technically called runway 20 – but the aviator “insisted on taking land in the north – known as runway 02”, explained the airport’s general director Raj Kumar Chhetri.

After the accident, the airplane has burned down, so the firefighters have had to put out the fire before rescuing the travelers. In some videos that several witnesses have posted on social networks can see the smoke column of the fire. The rescue teams of the airport and the Nepalese Army are working in the area. “It looked like a bomb had fallen”, Kailash Adhikari told The New York Times. Adhikari works at the airport as a driver of a fuel company and has assured that firefighters have taken 15 minutes to put out the flames.

The Prime Minister of Nepal, Khadga Prasad Oli, has announced the creation of a commission to investigate the incident. The US-Bengali airline has stated that it suspects that the airport control tower was negligent in sending erroneous information to the pilots:: “We are not making any accusations, we suspect that there may have been negligence on the part of Nepal”, has explained Imran Asif, executive director of the airline. Asif revealed that the company has an extract from the conversation of Air Traffic Control in which you can see communication problems between the pilot and the controllers.

The airport has announced the cancellation of all flights after the accident, and those who were directed to the TIA have been diverted to other nearby destinations, as explained by airport sources. The plane was a Bombardier Dash 8, with license plate S2-AGU and 17 years old. The plane descended to an airport altitude of 4,400 feet and then climbed to 6,600 feet before crashing about two minutes later. The airline is a subsidiary of the US-Bangla Group, a US-Bangladeshi company.