North Korea has begun to rebuild their satellite testing and launch center in Sohae, in the north-west of the country, as warned by southern intelligence services and US military analysts. Pyongyang had partially dismantled these facilities – key to the development of their ballistic missile engines – as part of its gestures to demonstrate goodwill in negotiations on nuclear disarmament, and the center had been inactive since August last year. 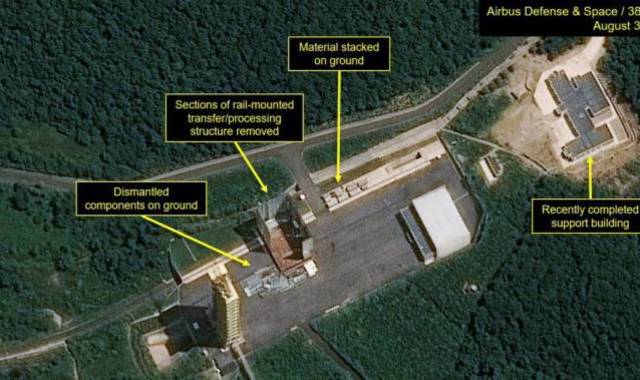 The existence of the works, visible in images via satellite, comes to light just a week after the failure of the summit between US President Donald Trump and North Korean leader Kim Jong Un in Hanoi. In that meeting on February 27 and 28, the United States rejected North Korea’s offer to dismantle their Yongbyon nuclear center in exchange for the lifting of international sanctions imposed from 2016, which affect the main economic sectors of the Asian country. Washington planned to lift the sanctions only in exchange for the complete dismantling of the North Korean nuclear program.

Both according to the South Korean intelligence services, which on Tuesday informed parliamentarians in Seoul in a closed session, as US analysts have stressed that the repair work seems to have started even before the Hanoi summit. The start of the works is due sometime between February 16 and March 2, which opens up the possibility that the repairs were underway even when the US negotiating teams. UU and North Korea met to close proposals in Pyongyang the week before the leaders’ meeting.

The current works do not imply that North Korea will abandon the moratorium on missile tests that has been imposed since November 2017, when they declared their armament program completed and affirmed that no further tests would be necessary. Pyongyang has never used Sohae’s facilities – also known as Tongchang-ri – to test missiles, only for the launch of satellites, and the images show no preparatory activity for possible tests.

Yes they can “indicate the plans of North Korea to demonstrate resolution in front of the American rejection of the North Korean exigencies in the summit on the lifting of sanctions”, point the experts Victor Cha and Joseph Bermudez, a project of the Center for Strategic and International Studies (CSIS) in Washington.

When the regime of Kim Jong-un announced that they would get rid of that center, and offered that American experts could verify it, dismantled a platform of launching of satellites, a structure used for the assembly and transport of vehicles of launching and a platform for the test of engines.

In the images published by the specialized page 38 North, two cranes can be distinguished: the repaired launch platform, and work in the vehicle assembly and engine testing buildings, which have a new roof and walls apparently Taller.

From Sohae, North Korea had developed the necessary technology to send rockets into space and manufacture engines for their intercontinental ballistic missiles. Pyongyang launched two rockets from there, the objective of which was to put two satellites in space in orbit in 2012 and 2016. The international community, however, interpreted it in both cases as covert evidence of a long-range ballistic missile and imposed by this new economic sanction to the regime.

Although the Hanoi summit ended abruptly, before time and without agreement, Kim and Trump said goodbye with the understanding that the negotiating teams would continue the talks to try to approximate positions. North Korea promised to continue its moratorium on intercontinental missile tests; The United States announced shortly after the definitive end of the great military maneuvers with South Korea, “Foal Eagle” and “Key Resolve”, one of their sources of friction with Pyongyang.

But, in a press conference hours after the failure of Hanoi, North Korean officials pointed out that Kim Jong Un could be “losing the will” to continue the negotiation path. In his first year’s speech, the leader had also warned that United States did not put their “patience” to the test.

For his part, the National Security Adviser of the White House, John Bolton, has warned that the United States could consider imposing new sanctions against North Korea if Pyongyang does not get rid of their nuclear weapons program. He also pointed out, however, in an interview with Fox News, that “the president (Trump) is willing to reach an agreement, willing to meet again” with Kim Jong Un.

2019-03-06
Previous Post: Children with greater hearing sensitivity: how it affects their life and development
Next Post: Kazakhstan renamed its capital Astana