At least 58 people have been killed and some 515 people have been injured, according to the latest recount, in a shootout recorded on Sunday night at an open-air music concert held in the vicinity of the Mandalay Bay casino hotel, in the city of Las Vegas (Nevada). 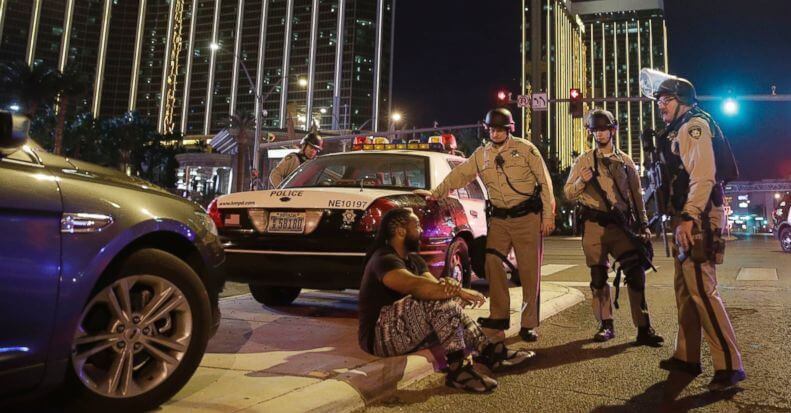 The author of the massacre, which shot from the 32nd floor of the casino hotel, has been identified as Stephen Paddock, a 64-year-old white man from Mesquite, Nevada, 130 kilometers northeast of Las Vegas. Paddock committed suicide just before the agents entered his room, as reported by the sheriff of Clark County, which is located in Las Vegas; previously it had been reported that he had been shot down by the police. Authorities estimate that there were around 22,000 attendees at the concert. The ISIS has assumed responsibility for the attack, something the authorities have welcomed with skepticism. It is the largest gun attack in US history.

President Donald Trump has condemned the event as “an act of pure evil”, in a press conference in which he has reported that he will travel to Las Vegas on Wednesday after visiting Puerto Rico on Tuesday to assess the damages of Hurricane Maria on the island. Nevada Police Chief Joseph Lombardo has said he believes he is a “lone wolf”. The alleged killer kept ten pistols and several long weapons in the room from which he shot, according to officer Kevin McMahill. Paddock, who had no serious criminal record, had been staying in that hotel room since 28 September.

After 10 pm local time, the concert of country singer Jason Aldean has been interrupted when there were bursts of shots coming from the Mandalay Bay casino hotel. The social networks began to fill with photos and videos of attendees of the last concert of the festival, in which there were screams of “stoop” and in that some of them were running while the shots were heard clearly.

The Islamic State (ISIS) has claimed responsibility for the attack through a statement from the Amaq agency, one of the organs of jihadist propaganda. “The attacker is one of our soldiers, who converted to Islam a few months ago”, they say. “There is so far no known link between the shooter and any known foreign group”, an FBI spokesman said at a news conference in the city. His name is not in any database of terrorism suspects.

Whether ISIS assumes a shootout does not necessarily mean that it has been organized, taken part in the preparation or execution. Police investigations of the attacks in Europe in recent years and assumed by the ISIS confirmed operational links between the Jihadist group and the terrorists in several cases including the most serious attacks, those of Bataclan with 130 dead and Brussels with 32 deaths. In most of the attacks, ISIS has served as an inspiration.

One of the witnesses of the massacre told Fox News that he thought they were fireworks but that, by not stopping the shots and seeing people running, he decided to hide behind a van. On local television, people are seen picking up anything that can help them move the wounded. According to the Police, 406 people have been transferred to nearby hospitals.

The Las Vegas Police investigated a room on the 32nd floor of the Mandalay Bay Hotel. About local midnight, the Police Twitter account confirmed that “a suspect has been shot down” and warned: “This is an active situation”.

One of the dead is a Las Vegas police officer who was out of service, while two of his colleagues who were working were injured. The agents ask “patience” to the citizens because “the process of identification of the wounded and dead will take time”.

All of Las Vegas’s main strip, the so-called Gaza, is cut by the police at the moment. Highway 15 is also stopped, which runs through the city. McCarran airport, which had suspended flights at midnight, has resumed its activity but with certain limitations. It is located east of the Mandalay Hotel. The shooting is recorded seven months after another that left one dead and one wounded in the same street.

It is the largest gun kill in the United States, surpassing that of Orlando, where 50 people died and 53 were injured in an attack on a gay club in the city on June 12, 2016.