Nancy Pelosi, the scourge of the Trump Republicans

Nancy Pelosi, who was for years the most powerful woman in Washington and wants to be one again, is a walking paradox. For Republicans, it embodies the epitome of Californian liberalism of the champagne. But she was born in Baltimore, is a practicing Catholic and her first job was as a housewife and mother of five children. For the young activists who seek to reinvigorate their own party, to whom she barely conceals her disdain, Pelosi represents the establishment. But she has been challenging the patriarchal elite of American politics for three decades. She embodies the past, but the future of the country may pass through her veteran hands. 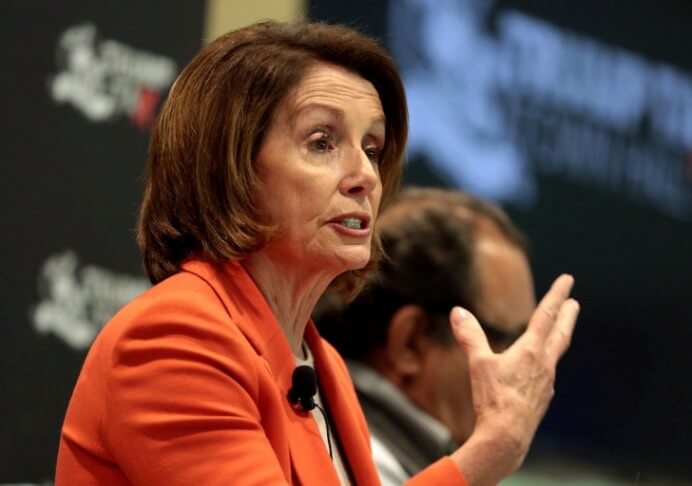 Pelosi does not like Americans. Only 29% of their compatriots have a good opinion on this matter. But few argue that she does her job well and, unlike other unpopular politicians, her 31 years of public service are clean of scandals. Her bad image can be toxic for her party, but the millions invested in campaign by the Republicans, in specific ads to crush her, failed to stop the blue wave that now she wants to surf.

On November 6, the Democrats regained control of the House of Representatives. A new batch of congressmen, female, young and diverse, is ready to stand up to President Trump and prepare the ground to evict him from the White House in 2020. That is the goal. Everything else – the strategy, the times, the tone, the person – is to be decided.

Since the blue wave was just a slight ripple on the horizon, Pelosi has been maneuvering to regain the position of president of the lower house that occupied between 2007 and 2011. That would make her the third authority in the country and the counterweight to a president whom she has referred to as “a very dangerous man”.

At 78, this may be Pelosi’s last great political battle. But it is the first assault in the fight of the democrats to avoid a second mandate of Trump in 2020.

Pelosi, who has led the Democratic parliamentary group for 16 years, is a tireless worker. An expert in legislative arithmetic, teacher in finding the lowest common denominator among the benches. But some people think that these virtues are of little use to an erratic president who has ended the tradition of compromise between parties. At stake is deciding what should be the role of the legislative power as a counterweight to the president. Or how to transfer to the carpet of the House of Representatives the resistance that the street expressed at the polls.

Unlike most other major congressmen in history, Pelosi is a woman. Like most of them, she is white, but she has fought like few because of the weight of ethnic minorities in the House. She is rich. She has a mansion in a luxury neighborhood of San Francisco and even some vineyards in the Napa Valley. But she is more liberal than most of her current teammates. Embodies continuity. Belongs to the generation that many wanted to give by buried with the defeat of Hillary Clinton. Like her, Pelosi is a well-prepared candidate. But maybe that’s not enough in a political circus that has Trump as master of ceremonies. That is the reason for the debate in a cohesive party because of her rejection of the president, but divided in much of the rest.

So far, 16 legislators signed a letter Monday in which they thank Pelosi for the services provided but believe that it should make way for someone new. They argue that their continued presence at the top of the democratic hierarchy blocks young leaders capable of renewing the structure. Of her proverbial art in the handling of the game, the skill with which Pelosi has been stealthily neutralizing the offensive is attested.

On Tuesday, Congresswoman Marcia L. Fudge, who was considering presenting herself as an alternative, gave her support to Pelosi. On Wednesday, another openly critical lawmaker, Brian Higgins, did the same and removed his name from the list. On the same day, the most influential figure of the Democrats, former President Barack Obama, warned that he would not interfere in internal affairs of the House, before expressing his support for “one of the most effective legislative leaders that this country has seen never”. Even the young Alexandria Ocasio-Cortez, a glittering star in the galaxy opposite to what Pelosi represents within the democratic universe, reluctantly backed her. “I will support the most progressive candidate to lead the party, and right now that is Nancy Pelosi”, she said, knowing that, today, the rebels do not even have a candidate.

Even so, they could have the numbers to stop Pelosi when the parliamentary group votes this week, or when the plenary session of the House decides on January 3. That, if none of the Republican congressmen follows Trump’s advice and votes for him. Because Pelosi, here is another example of her ability to build bridges, she has achieved the feat of agreeing with Obama and Trump. “I can get Nancy Pelosi as many votes as she wants in order for her to be Speaker of the House. She deserves this victory, she has earned it – but there are those in her party who are trying to take it away. She will win!”, president tweeted.

You may think that her presence benefits Republicans, or it may have influenced Trump the fact that Pelosi has made it clear that her priority will not be to promote her impeachment. “There are those who want to pursue the impeachment or abolish the federal deportation agency, two winning issues for us, right? In the districts where we have to win?”, Pelosi irked in an interview in The New York Times. “If the evidence of Mueller [the special prosecutor who investigates Trump for the Russian plot] is conclusive, it should also be for the Republicans, and that could be the moment of truth. But that’s not where we are now”.

Now, according to Pelosi, it is time to leave behind the divisive rhetoric of the campaign and legislate. The idea is that, despite the foreseeable turbulence in the investigations of the Congress, both parties have reasons to work together: two years of legislative blockade, with a camera in the hands of each formation, they can alienate the moderate voters that the democrats have in the bullseye for 2020. The trade agreement with Mexico and Canada, the price of medicines or investment in infrastructure are some of the issues where a priori would fit an understanding between the two banks.

At the same time, Democrats must be careful not to provide Trump with political victories. And do not lose sight of the ultimate goal: convert the confidence expressed on November 6 in the polls in a victory in 2020. Before, the identity of the party should be defined with the process of election of candidate. The decision on Pelosi will be a succulent appetizer.

2018-11-26
Previous Post: US sanctions 17 Saudi officials for killing Khashoggi
Next Post: The artificial intelligence of Google achieves a milestone in front of one of the biggest challenges of biology