Mugabe refuses to resign despite the intervention of the Army

Two days after the Zimbabwean Army carried the tanks to the country’s capital, Harare, to take control of the main institutions, local television and, above all, the Presidential Palace, the 93-year-old President Robert Mugabe and under house arrest, he resists leaving office. 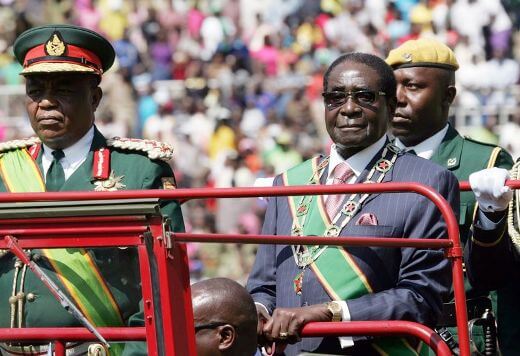 According to a source quoted by Reuters, the longest president in the world is being held with his wife, Grace Mugabe, and several political allies, in the complex blue house of Harare. The leader of the government party Zimbabwe African National Union – Patriotic Front (ZANU-PF) insists on his intention to exhaust the current mandate, which should expire after the elections scheduled for 2018.

A delegation of envoys from neighboring South Africa has reached Zimbabwe to be with Mugabe during this Thursday. Precisely the South African President, Jacob Zuma, in his capacity as number one of the regional organization Southern African Development Community (SADC), has convened an emergency meeting today in Botswana to address the crisis.

The activity of the streets of Harare maintains a certain degree of normality in the midst of endless speculation about the future of the presidential couple, their allies and the government of one of the poorest countries in the world. The South African chain SABC has also reported that a Catholic priest would be mediating between the parties for a possible solution to the crisis. According to this channel, Mugabe, accompanied by ministers Jonathan Moyo and Savior Kasukuwere, maintains that only the vote within his party would make him leave.

The SABC has revealed, coinciding with other information from the recently published foreign press, that Zimbabwe is possibly facing the formation of a transitional coalition government in which the former vice-president Emmerson Mnangagwa, ZANU-PF, dismissed last November 6 for Mugabe himself, he would be in front in alliance with other political parties such as the Movement for Democratic Change – Tsvangirai (MDC-T). The Zimbabwean opposition leader, who has already beaten Mugabe in the first round of the 2008 elections, has returned to Harare after two months of cancer treatment in South Africa. His secretary general, Douglas Mwonzora, has already shown his willingness to enter into a transitional executive.

The dismissal of Mnangagwa, who maintains strong ties with the army and veterans of independence, a power group in the country, has been the trigger for the intervention of the military, with General Constantino Chiwenga at the helm. “Political logic”, Derek Matyszak, of the analysis center for the Institute for Security Studies, based in Pretoria, said in a video analysis, “suggests that the military intervention will be short and that once they make sure that Mnangagwa assumes the presidency, they will return to the barracks”.

The possible road map, according to Matyszak, would go through Mnangagwa’s return to the vice presidency so that, once Mugabe resigns, he can assume power in a transitory process, of a maximum of 90 days, in which the ZANU-PF should choose the new leader in extraordinary congress. The former vice president, who left the country for alleged death threats after his dismissal, has returned in the last hours.

For the moment, Mugabe is still, at least on paper and according to the version of the Army, the country’s president and commander-in-chief of the Armed Forces. But his scarce popularity, after 40 years in power, and the operation of the economy, once again committed to hyperinflation, have resulted in neither political parties nor civil society condemning military intervention as a “coup d’état”. Neither has this conviction come from the foreigner. Only the African Union, currently chaired by the Guinean leader Alpha Conde, has stated that “he will never accept the coup of this military” and has called for the return to the Constitution through political means.

2017-11-16
Previous Post: Learn how to throw a slider
Next Post: Koreans Push to Legalize Marijuana through Online Petition