More than 220 killed in a strong earthquake at Mexico

Mexico strongly shook again for the second time in two weeks. An earthquake of magnitude 7.1 shook on Tuesday in the center of the country. At least 224 people have died in different areas, which is known: 86 of them in the capital, 71 in Morelos, 43 in Puebla, 12 in the State of Mexico, four in Guerrero and one in Oaxaca, although the figure increases with the passing hours. The quake occurred the day they met 32 years of the worst tragedy that has prevailed in the country: the earthquake that caused about 10,000 deaths in 1985. 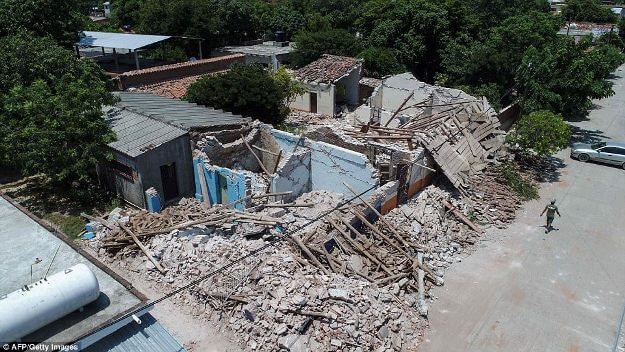 At 13.14 local time soil again resound in Mexico, just 10 days after the earthquake of greater magnitude (8.2) in 85 years. On this Tuesday, with its epicenter in the limits of Morelos and Puebla, it was lower than 7.1, but its proximity to the capital has caused the damage is much greater.

Chaos and panic gripped the city. More than 40 buildings collapsed, including two schools. In one of them, Rebsamen, the country’s president, Enrique Pena Nieto, confirmed after ten o’clock the night had killed at least 21 children and 30 others were still missing. At the last hour of the evening of Tuesday, the city remained wounded, but did not stop the rescue to try to pull survivors from the rubble. The solidarity of the citizens, who took to the streets to assist the victims, was unstoppable.

“It is the earthquake that more I have felt,” it was one of the most repeated comments among the residents of the capital, accustomed as they are to feel the tremors, but never as violent. In the neighborhoods of Roma and Condesa, more swampy area of the city and suffered like few the tragedy of 1985, tremor struck harshly. Amsterdam Avenue, a circular street of Condesa, was at the last hour of the afternoon, a continuous human chain was working with those affected by the collapse of several buildings. In the corner of Calle Laredo, people bustled by removing the debris as they could. Viviana Ortiz, a resident of Monterrey Street, saw her home collapse. “The block collapsed horribly, completely. Raised a huge cloud of smoke and heard a chilling thunder”.

The capital awoke to the memory of the earthquake in more than three decades ago. And as usual every 19 September, an evacuation drill was held in Mexico City. Two hours after the test, seismic alarms did not jump, unlike what happened two weeks ago. Most of the sensors are located in coastal areas, not inside the country. And the epicenter of the quake has been in Morelos, in central Mexico and just 100 kilometers from the Mexican capital. There was no technical failure, according to official sources tremor could be detected in time for the population to abandon the place where it was to be safe.

After the earthquake, there were cuts in the light service – 3.8 million of people were affected – and in the telephony, which increased tension to the inability to locate people. Over the hours, Telmex, the largest telephone company in the country, opened its WiFi in the capital. The airport operations were suspended for a few hours, after which one of the terminals affected by the tremor.

The epicenter was located 12 kilometers southeast of Axochiapan, located in the central state of Morelos, 57 kilometers deep, according to the National Seismological Service. The agency reported via Twitter of a temblor of magnitude 7.1, by making an update of a first report which had set the magnitude at 6.8.

In the central state of Puebla it has been reported the fall of the towers of the Church of Cholula. In the state of Morelos, damage has also been reported, and the governor, Graco Ramirez, has announced the activation of emergency services. Dozens of buildings have fallen into Mexico City, with some collapses recorded in video and disseminated by social networks.

Pena Nieto, who was in the Oaxaca road at the time of the quake, convened or the National Emergency Committee to assess the situation and coordinate the actions. The president announced the deployment of 3,000 soldiers in the capital.

The magnitude of the earthquake has resulted in messages of support from international leaders such as the Colombian, Juan Manuel Santos, who has expressed his “solidarity” with the Government and the Mexican people. The President of the United States has also spoken, Donald Trump: “God bless the people of Mexico City.” “We are with you”.

2017-09-20
Previous Post: Three other people arrested in London bombing
Next Post: A Palestinian shoots three Israeli agents in a settlement near Jerusalem