Merkel and Ivanka Trump, together for the inclusion of women in the economy

German Chancellor Angela Merkel and the daughter of US President Ivanka Trump have been in Berlin on Tuesday as allies in defense of the inclusion of women in the world of work and finance.

In her first overseas trip as an adviser to the US president, Trump has hoarded all the foci of the Women20 (W20) which is held in the framework of the G20 in Berlin. 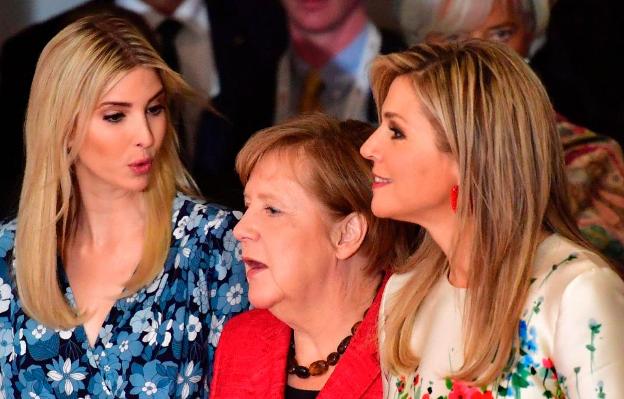 Sitting next to Merkel, the managing director of the International Monetary Fund (IMF), Christine Lagarde; Queen Maxima of Netherlands, Ivanka Trump has participated in a high-level debate on support for women entrepreneurs. Trump daughter has come out in defense of her father before the critics that she has received by dealing of the women.

Merkel has taken advantage of the event to announce the launch of a new financial facility for access to credit for women in developing countries. Berlin wants to push forward this initiative within the framework of the G20 – the group of the most industrialized and emerging countries that will hold its summit of heads of state and government in Hamburg in July – and, as Merkel pointed out, hopes that countries will join it such as Canada, USA and Holland.

Participants in the forum have agreed on the need to facilitate women’s access to credit to promote their economic independence and boost their business, the focus of the German proposal and the speech by Maxima of Netherlands, a special adviser to the Secretary-General of the UN For financial inclusion and development.

However, they have disagreed when they have been asked whether they considered themselves to be “feminists”. Merkel refused to claim that title, although she put on the table some of the measures approved by her Government. Ivanka Trump did not hide the existing gender inequality in her country and advocated as her father for deregulation to boost the economy.

2017-04-22
Previous Post: The flying taxi Lilium completed its first flight without a pilot
Next Post: Nintendo launched the New 2DS XL, a new economic model of its portable console