Melania Trump violated immigration laws. The wife of Republican presidential candidate Donald Trump worked as a model for several weeks in 1996 in the United States without the necessary work permit to work legally in the country, as revealed by the Associated Press after reviewing documents and contracts of the time. 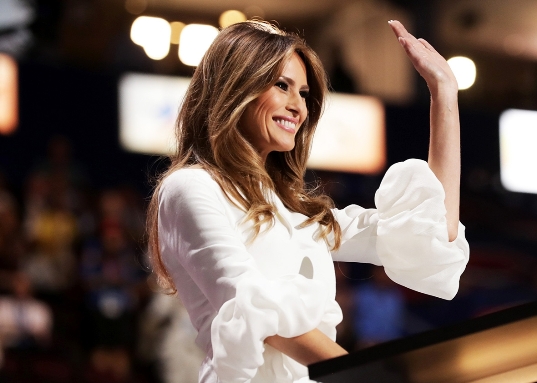 The former Slovenian model received approximately $20,000 (18,000 euro) by ten work carried out in the United States in the seven weeks to have a work permit. Melania explained through his attorney on 27 August 1996 came to United States from Slovenia with a B1/B2 tourist visa, and 18 October obtained her employment H-1B visa. However, she worked as a model between September 10 and October 15, 1996 and charged for it, even though she could not legally at that time, according to documents consults by AP.

After taking several visas, Melania managed in 2001 to lawful permanent residence, the famous Green Card. In 2006, she became an American citizen.

The wife of Trump declined in June violating immigration laws of the United States, after doubts arise about the immigration status she had when she first entered the country after the publication of nude photographs made for the French magazine ‘Max’. “Let me make this clear: at all times I have complied with the immigration laws of this country. Point. Any claim otherwise is simply false”, said Melania in June. So far, neither the former model nor Trump has reacted to the new revelations of AP.

Last Thursday Melania was presented to American voters as an immigrant from a communist country that achieved the American dream. “Living and working in the United States was a real blessing, but I wanted something more: wanted to be American”, confessed Melania in her first election rally, after in July they were accusing her of pirating partially a speech of first lady Michelle Obama. Melania considered to have the American passport is “the greatest privilege in the world”.

Trump has made during the election campaign to his wife as an example of good immigrant who meets the immigration laws of the country.

The Republican candidate has made a xenophobic and anti-immigrant campaign. And he has promised that if he is elected president deported the 11 million undocumented immigrants, most of them Latin Americans who currently living in the United States and work without a work permit.

Trump has also proposed extending the use of the government program “E-verify” that allows employers to verify whether job applicants have authorization to work in the country. And he wants to build a wall along the border with Mexico to stop illegal immigration and drug entry into the country.

2016-11-06
Previous Post: Mila Kunis denouncing sexism in Hollywood in a public letter
Next Post: The FBI maintains that there is no basis to prosecute Clinton for emails