The driver, with a psychiatric history, was arrested. There is another person injured. Discard a terrorist attack… 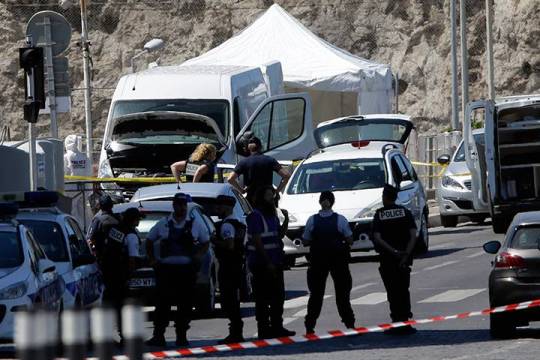 One woman was killed and another wounded in a double hit at different bus stops in Marseilles, southern France, committed by a man driving a van, who has been arrested, although Police Prefecture has not yet determined the motivations of the fact. And the Prosecutor’s Office did not consider it a terrorist act.

Marseille prosecutor Xavier Tarabeux said that for the time being “there is no element corroborates the thesis of a terrorist attack” and that the suspect would suffer “psychiatric” problems.

The suspect “had in his possession a letter from a psychiatric clinic and headed towards the track,” added Tarabeux.

The police spokeswoman who confirmed the facts declined to comment on the motivation of the perpetrator, claiming that it is up to the court to determine.

The first of the abuses took place at 8:30 local time, at a bus stop in the 13th arrondissement and the second half hour later in the 11th arrondissement with the same white Renault Master van which was stolen.

French security forces opened a major police operation in that Mediterranean city that led to the arrest of the alleged perpetrator in the old Marseilles port an hour later, while the anti-explosive division came to the scene and verified that the vehicle did not carry any type of bomb.

Julien Ravier, mayor of Marseille’s 11th arrondissement where the fatal incident occurred, told that the dead woman was about 40 years old.

The arrested man is a 35-year-old man with psychiatric problems and a history of common crime (drug trafficking, robbery and possession of weapons), but without links to extremism.