Key meeting between Trump and Xi Jinping in an armored resort

Donald Trump, who harshly criticized China before his election, met face-to-face with President Xi Jinping last night in the relaxed setting of Mar-a-Lago, the luxurious residence of the billionaire US president on the Florida coast. The place is protected by a gigantic display of snipers, tactical units and coast guards. 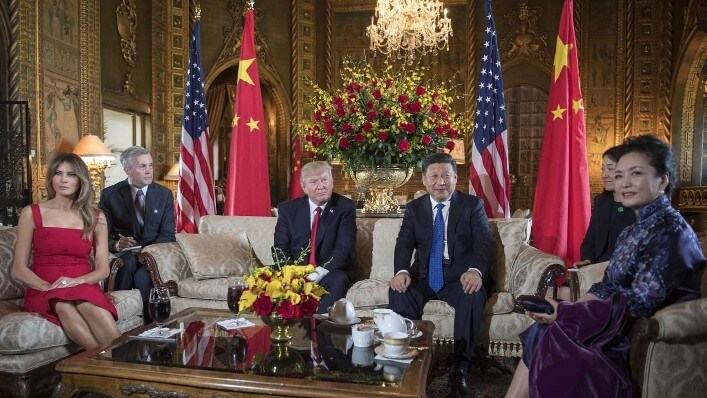 Xi Jinping, who was received at the Palm Beach airport by Chancellor Rex Tillerson and a military guard of honor, has so far been very or cautious in his reactions to the provocations of tycoon.

Before the meeting, Trump confirmed that the two central issues will be the challenges of the North Korean regime – critical ally of Beijing – and the delicate against international trade. In the flight that took him to Florida, the US president told reporters that “China will be a step forward” to help Washington end Pyongyang’s nuclear program.

On the trade issue, he again criticized the Chinese position. “We have been treated unfairly and made terrible commercial offers for many, many years. That’s why it will be one of the things we’re going to be talking about”, he said. “The other is North Korea. Somehow they are mixed. So let’s talk about trade, North Korea and many other things”, Trump said.

Specialists believe that the situation will also be strained in Syria, especially after Trump’s administration warned it could carry out military action against the Bashar al-Assad regime.

Leaders of the two major economic powers had planned to dine at the resort, known as the “Winter White House”. They were accompanied by their wives, former model Melania Trump and former singer Peng Liyuan. But today, early on, they will hold a series of meetings in what promises to be a master class of studied informality.

The billionaire has called China the main rival of the United States, mainly in international trade, and the accused of weakness in its response to the nuclear threat posed by North Korea. He also accused Beijing of “manipulating” its currency, affecting global trade.

Although both countries should continue their diplomatic “tradition” of maintaining “strong commitments”, there are several stones along the way that must be cleared. The first thorny issue is North Korea, which again challenged Washington and the international community on Wednesday by launching its fifth missile so far this year.

A few hours before receiving Xi, Trump assured in a telephone conversation to Japanese Prime Minister, Shinzo Abe, that US “Will continue to strengthen its military capability” in the face of “the serious threat that continues to represent North Korea”. For several weeks Washington has urged Beijing to put pressure on its ally Pyongyang.

“It is a problem that has become urgent. It is an urgent and worldwide threat. So it’s an issue that we will discuss”, said Susan Thornton, Asia’s head of the State Department. “I think we will seek China’s help to increase the pressure” on North Korea, he said.

Another hot topic is trade. Trump wants to address the US deficit with China, which rose to $350 billion by 2016. The White House has promised to speak frankly on this issue, to “reduce the barriers to investment and trade created by the Chinese”, explained by a government source.

China imposes a 25% tariff on imports of vehicles, limits purchases of many agricultural products and closes the important service sector to foreign investment. In this context, it is difficult to predict where the talks will go.

2017-04-06
Previous Post: Spotify and Universal signed long-term agreement
Next Post: Terrorist attack in Stockholm: they look for the suspect who ploughed a truck into crowds