The sculpture of a child in anti-radiation clothing, designed as a premonition of the future that awaited Fukushima, will be removed from this Japanese city because its inhabitants consider that it does not correspond to the reality that is lived seven years after the nuclear accident of 2011. 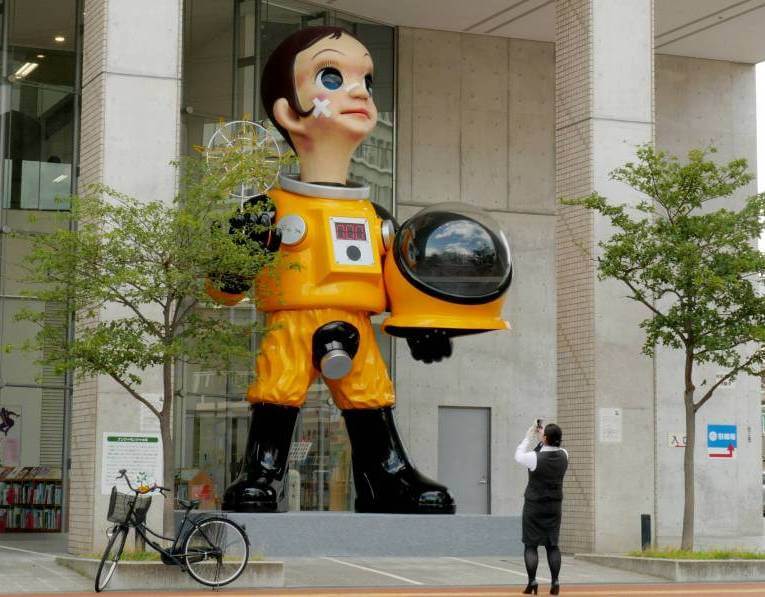 The author of the work, Kenji Yanobe, has apologized on Twitter and has announced that he will remove the sculpture from the entrance of the shopping center next to the central station of Fukushima where it had been inaugurated on 3rd August.

Titled Sun Child, the work represents a child designed with manga aesthetics, with huge eyes and some bruises on the face. His protective suit is the same yellow color as the symbol of nuclear radiation and has a digital sensor on his chest that marks zero radioactivity.

Yanobe, a well-known local sculptor whose theme challenges life after an atomic war, began to make versions of the work shortly after the nuclear accident that caused an escape after a 9 magnitude earthquake and a devastating tsunami that caused a fusion of the nucleus in several reactors of the Fukushima Daiichi plant, located on the coast of the province of the same name.

The radioactive leak caused by the disaster turned the appellation of origin “Fukushima” into a curse for all products grown in the area and many families with children left to avoid having to live next to a damaged power plant whose cleaning and dismantling will last several decades.

Fukushima capital, located about 65 kilometers from the coast, never suffered the exodus that uninhabited the coast where exclusion rings were created around the damaged plant.

The sculpture, 6.2 meters high, apparently revived the fear of being seen as an uninhabitable area and many children were scared by the size or did not understand the critical proposal of the artist.

Hayashi broke down the negative feelings inspired by the work and concluded that the most appropriate place to house it was a museum and not a public space for daily use as the entrance of a store. Many residents shared their opinions and after a survey by the municipality, 70% agreed to withdraw it.

For being the only country in history to have suffered two nuclear attacks – by the United States at the end of World War II – thousands of Japanese survivors suffered the aftermath of radioactivity and was segregated for fear of procreating mutant beings.

A similar fear followed the tragedy of 2011 and many of those who left Fukushima wanted to erase their past to avoid in their children a stigma similar to that suffered by the irradiated Hiroshima and Nagasaki.

To neutralize the destructive image of the two bombs, the United States devised the program “Atoms for peace” with which it promoted the commercial use of atomic energy and endowed Japan with more than fifty nuclear power plants, some in high-altitude areas, seismic risk.

The most memorable creations of popular Japanese art of the twentieth century, such as Godzilla, Astro Boy, Akira or Nausica, speak of beings mutated by radioactivity originated in an atomic hecatomb. But unlike Sun Child, which as a work of art is open to multiple interpretations, those are held in a narrative that draws lessons from the destruction caused by the most dangerous source of energy manufactured by man.

2018-08-31
Previous Post: California, a disaster not so natural
Next Post: Exercise to strengthen the abdominal and the diaphragm