France remembers the victims of the attacks in Paris

French President Francois Hollande, has started this morning at the stadium of France at the solemn ceremony honoring the victims on the first anniversary of the terror attacks in the French capital. 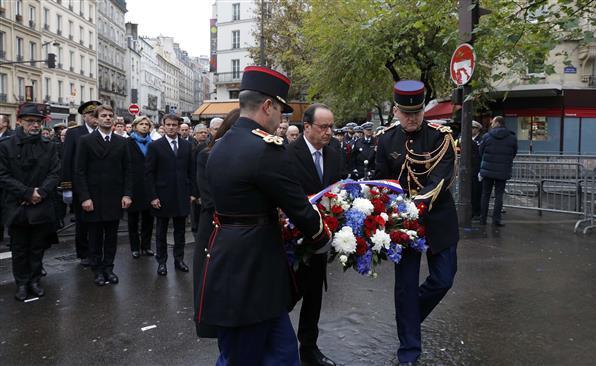 Hollande has presented a commemorative plaque in particular memory of the only deceased on the gates of the stadium: Manuel Dias, the Portuguese driver who had just left several people to open the doors to enjoy the football match between France and Germany.

The ceremonies are progressing with great intimacy between, the Mayor of Paris, Anne Hidalgo, Prime Minister, Manuel Valls, and the relatives of the deceased, with whom they are talking privately.

Then the representatives of the French Government have moved towards the rue de la Fontaine au Roi, in the 11th arrondissement, to publicize a second plate, located near the cafe-restaurant Bonne Biere, where killed five other people, to whose names.

Finally, they have completed the tribute to the victims in the Bataclan concert hall Paris, scene of the bloodiest massacre of the chain of attacks in the French capital.

The leaders have responded in silence to the enumeration of the names of the 90 victims before greeting the families of the deceased and a few words of appreciation to the security forces entered the room to stop terrorists.

First anniversary of November 13, 2015
Nine terrorists sowed panic the night of November 13, 2015, spread over different areas of the French capital. Three of them blew themselves up and killed one person near the France stadium in Saint-Denis, while three others opened fire indiscriminately against bars and terraces of the downtown area and left 39 people dead.

The most tragic scenario was the Bataclan concert hall, assaulted to blow guns and explosives while the Eagles of Death Metal group offered a concert. Ninety people died in a center that precisely this Saturday celebrated its reopening with a recital of the artist Sting.

2016-11-13
Previous Post: The IS claimed the attack in Pakistan which has caused dozens of deaths
Next Post: German coalition agrees that Foreign Minister Steinmeier is a candidate for president