Finally the boy in the plastic bag shirt fulfilled his dream

The child who made a shirt with a plastic bag fulfilled his dream of meeting his idol, football star Lionel Messi.

In what was observed in a photo, it has been one of the most viral scandals in social networks and on the web, which touched the hearts of many people who visualized the image and some organizations agreed that the Boy from Afghanistan met Messi. 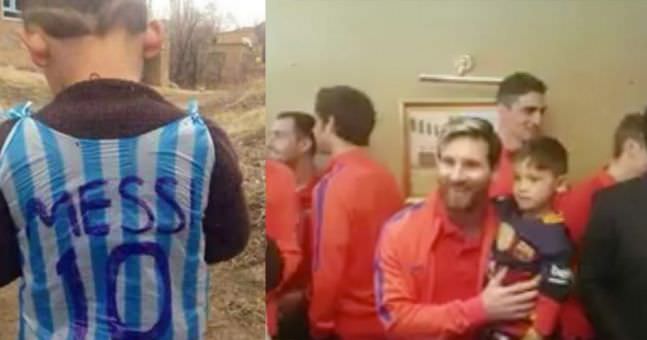 Murtaza Ahmadi best also known as the child of Messi plastic bag T-shirt has been the protagonist of a very beautiful and moving story, after his viral photo, could share great moments with his sports hero.

The Afghan Child
With only 6 years old, this child who asks his brother to draw with a grocery bag, a t-shirt, in the back the name of Messi and number 10 concerning the uniform selection of Argentine soccer.

This photo went viral since January 2016, taking over the entire web and came to be seen by the same Messi, who sent two t-shirts and ball to Murtaza Ahmidi, but dreamed to know him.

The image of the Afghan child with Messi Jersey continued moves to many people around the world and his father began to find a way to turn into reality the dream of his son.

The growing fame of Murtaza each led to the Afghan soccer federation to contact the star, but failed to reach him. His family immigrated to Pakistan to create a possibility and also because the child was threatened by an Afghan mafia.

The meeting took place in Doha, Qatar, during the stay of Barcelona Club in that country for a friendly match against Al Ahli; the organizing committee plans the entire trip of Murtaza Ahmidi with his family to Qatar, in order to meet his favorite football star.

Both enjoyed a pleasant encounter, the boy totally thrilled standing next to Messi, could find no way to express his great idolatry and admiration before him, also was a meeting full of tears to others who were in the place watching this tender encounter.

The story had a happy ending, showing that all in life is possible and that dreams can be fulfilled, as the child who made a Messi shirt with a plastic bag.

2016-12-15
Previous Post: Trump will nominate today Rex Tillerson new secretary of the State
Next Post: Obama: ‘US will take action against Russia for the electoral interference’