The terror that struck on Friday, a day dedicated to prayer in Islam, a mosque full of worshipers in Sinai seems to have no limits. The General Prosecutor of Egypt has raised to 305 this Saturday the balance of fatalities, including 27 children, of the terrorist attack against a Sufi temple in Bir al-Abed, 40 kilometers west of the city of El Arish, epicenter of the franchise of Islamic State in the north of the Sinai. The number of wounded has been established at 128. The attack against the al-Rawda mosque in midday central prayer represents the bloodiest terrorist action recorded in the North African country and is one of the deadliest that are remembered worldwide. 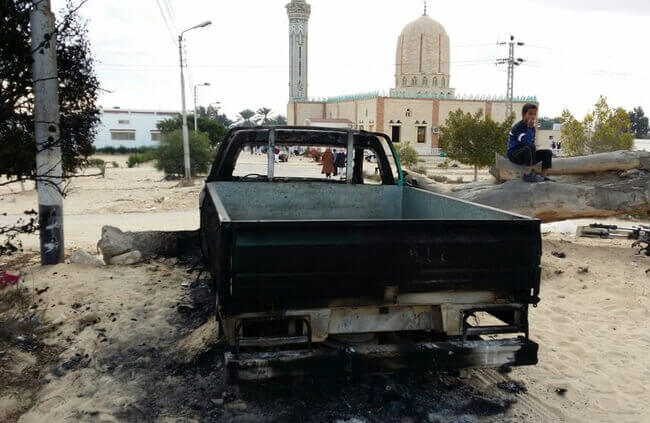 The prosecution has ensured in its reconstruction of the facts, based on the testimony of survivors of the attack, that “between 25 and 30 attackers of the mosque waved the flag of Daesh (Arabic acronym Islamic State)”. The assailants, who wore paramilitary uniforms and had their heads covered, “placed themselves with automatic weapons in the doors and windows of the mosque and opened fire on the faithful”, said the statement of the prosecutor’s office reproduced by the state news agency MENA.

Witnesses to the attack cited by the online edition of the newspaper Al Ahram claimed that the terrorists blew up a bomb in the mosque, attached to the moderate Sufi rite, considered heretical by extremist Salafism, while several armed men opened fire indiscriminately against the faithful. The emergency teams evacuated to nearby hospitals to the survivors in dozens of ambulances and private vehicles despite being the target of terrorist attacks. Among the victims were numerous young replacement soldiers serving mandatory military service in the troubled area of North Sinai.

The Egyptian president, Abdul Fattah al-Sisi, who has declared three days of national mourning, promised to respond with “brutal force” to “avenge the martyrs” of the attack. Although the attack has not been claimed by any extremist group, the Air Force has bombed mountain areas throughout the night from Friday to Saturday to destroy vehicles of advanced positions of jihadists affiliated to ISIS in the north of the Sinai.

In the midst of the worldwide commotion and the unanimous condemnation of international leaders, Egypt has witnessed this Saturday, in tears, the funerals of the victims in the bloodiest terrorist attack in its modern history. The attack against a mosque full of the faithful supposes an escalation in the barbarism of jihadism, which has already lost its territorial bastion in Syria and Iraq, and whose militants wander without a fixed base along the border between both countries or through the deserts of Libya and Sinai.

Since the Army overthrew President Mohamed Morsi in July 2013, affiliated with the Muslim Brotherhood, Sinai has become the main focus of violence in Egypt. On the western border with Libya, there are also jihadist groups that maintain allegiance to Al Qaeda, such as Ansar al-Islam. The militants of Sinai Province, the local branch of ISIS, have multiplied the attacks against the military and police and the attacks against civilians who work for the State with the aim of sowing terror in the region.

The Sinai was semi-demilitarized after the departure of Israeli troops, ending the invasion of the Peninsula that maintained between 1967 and the 1979 peace agreements, when the Government of Cairo recognized the Hebrew State. The jihadists in the region pledged allegiance to the Islamic State (ISIS) at the end of 2014 and established the so-called Sinai Province of the Caliphate in the peninsula on the border with Israel and Gaza – through the Rafah border crossing – and with the Suez Canal.

Tourists in Cairo and the Nile Valley, as well as the Coptic Christian community – in which more than a hundred deaths have been reported so far this year in sectarian attacks – have also been subject to terrorist attacks. Two years ago, a Russian plane with 224 occupants on board crashed in the Sinai as a result of an explosion when it had just taken off from the tourist town Sharm El Sheikh, on the shores of the Red Sea. There were no survivors.

Last February, Christians in the region of El-Arish fled in mass, where on Thursday there was an attack on the mosque, following a wave of attacks against their communities. The ISIS jihadists also beheaded last year a local Sufi sheikh, whom they accused of heresy and magic, according to Agence France Presse. Many followers of Sufism have been kidnapped by groups linked to ISIS and released only after declaring in public that they repent and renounce their beliefs. The Sinai Peninsula is declared a zone of military security, where the media have no access.

2017-11-26
Previous Post: Panic on Black Friday
Next Post: 6 tips not to lose patience in front of your old PC