The US president, Donald Trump, said today that North Korean leader Kim Jong-un, took a “very wise” decision to suspend his plans to attack the US island Guam, because the alternative would have been “catastrophic”. 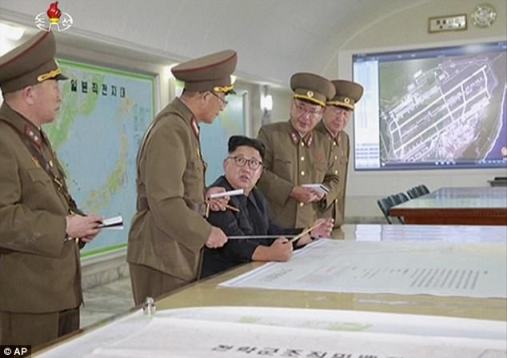 “Kim Jong Un of North Korea made a very wise and well reasoned decision. The alternative would have been both catastrophic and unacceptable!” Trump wrote in his Twitter account.

Trump’s response follows yesterday Kim’s announcement, of delaying an attack on the American island Guam in the Pacific until he sees what will be America’s next step in the region.

Both countries are leading a dangerous verbal escalation that erupted about 10 days ago, when the UN Security Council approves harsh economic sanctions against the Pyongyang regime for its nuclear and ballistic missile tests.

Kim threatened by revenge “Thousand times stronger” and Trump responded with a retaliation of “fire and fury” had never seen.

Yesterday, after examining the missile strike plan to Guam, Kim suspended the offensive in order that the US deactivates its military maneuvers with South Korea in the region.

Diplomacy is the way

The deputy foreign ministers of South Korea and the US on the telephone deal the current tension with North Korea, in a conversation in which the representative of Washington assured that diplomacy is still the main way to defuse the crisis.

South Korean Deputy Foreign Minister Lim Sung-nam and his American counterpart John Sullivan spoke on Tuesday as the first interaction between the two since the two diplomats in Washington took office in May, according to the Ministry Of Foreign Affairs.

Sullivan stressed that Washington’s position is to seek all diplomatic and economic measures to resolve “peacefully” the current escalation of tension and also to achieve the denuclearization of the regime of Kim Jong-un, according to an external spokesman quoted by Yonhap news agency.

2017-08-16
Previous Post: United Kingdom wants to avoid controls on the Norwegian border after the ‘Brexit’
Next Post: Big Ben rang for the last time and now goes into repair