Donald Trump in Saudi Arabia: Dances with swords, an “evil” image and an inopportune nap

Donald Trump’s official visit to Saudi Arabia left many curious images. The president of the United States moved away from his customs to try to integrate himself in the Muslim community and thus to obtain some new sympathies. He managed to adapt to a new scenario for him, but along the way his expedition starred some anecdotes. 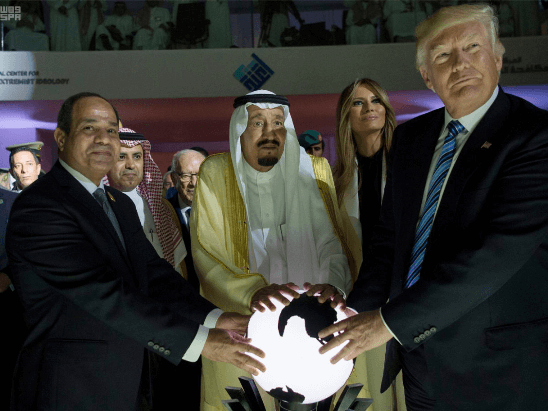 The photograph that is now going around the world seems more worthy of few Marvel villains than of the real life. Donald Trump, President of Egypt, Abdel Fattah al-Sisi, and Saudi King Salman bin Abdulaziz appear hand on a miniature globe that emulates the planet.

When the trio quoted hit the shiny ball with their hands, the new global center for fighting extremism in Riyadh was officially activated. It is a space where radical ideology will be combated, especially on the Internet. Dozens of computer experts will monitor suspicious digital communications. Unsurprisingly, social networks did not resist parodying the snapshot and finding other similar ones.

The most recurring comparison among tweeters has been to say that this trio of world leaders reminded them of Hydra, that organization of the most evil villains in the Marvel universe. An association committed to dominate the world, whatever it may be. The brightness of the globe illuminating only to Trump, Melania, Abdel Fattah al-Sisi and King Salman bin Abdulaziz, leaving the rest of the companions in the shadow, it facilitated the terrifying touch.

That wasn’t the only story that has accompanied the President Trump in Saudi Arabia. During his address to 55 Muslim leaders, he seems to have bored more than one of those present. It was not an Arab, but a member of the American expedition. US Commerce Secretary, Wilbur Ross, was hunted on the TV, nodding and completely disconnecting from what Trump said.

It is not known if the trip did notch Ross (79 years) or if he allowed himself the luxury of sticking an inopportune nap to know beforehand the speech of his president. The truth is that his image fighting the dream next to Ivanka Trump is being highly commented on the networks.

The last curious image was to see Donald Trump dancing, but this time it was not a ballroom dance with Melania, but his “companion” was a sword. The president did not hesitate to participate in the traditional Saudi dance offered by King Salman bin Abdulaziz.

Trump was amused at the welcome ceremony he had been given on his first outdoor tour. The videos record his smile as he moved the body to the beat of the music along with other Saudi officials. By the way, Wilbur Ross, now awake, also participated in the ceremony.

2017-05-21
Previous Post: A new deadly Ebola outbreak occurred in Africa
Next Post: A Few Top Reasons to Get Your Child Play Golf