X-ray of the cultural disaster in Notre-Dame: what was burned and what resisted

The disaster of Notre-Dame left speechless those who, helplessly, contemplated live how a piece of history vanished. The battle against the fire was fought for twelve uninterrupted hours, from the moment the wooden attic that supported the roof of the temple began to burn. Luckily, it is already considered practically extinct, as claimed by the spokesman of the firefighters, Gabriel Plus, in statements to the press on Tuesday morning. 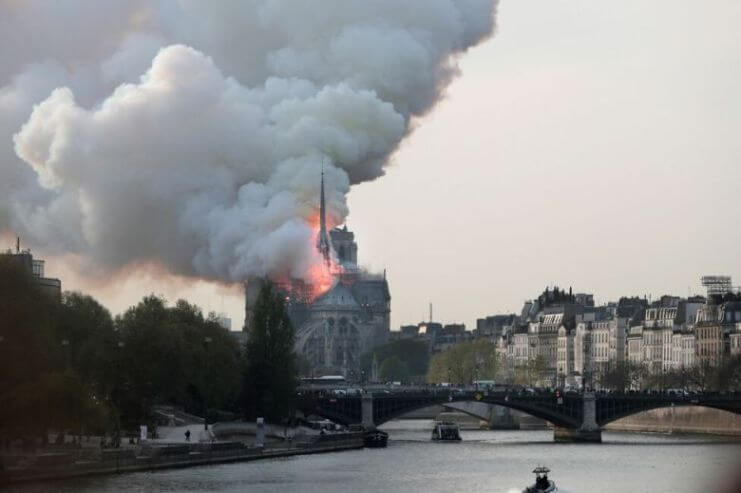 Although the causes are still unknown, “nothing suggests that it was provoked”, said Remy Heitz, prosecutor in Paris, on Tuesday. The fire spread rapidly through the wooden attic that supported the roof of the temple. “We have saved the towers, which are safe at this time, the grandstands are also consolidated, the heart of the ship, however, is very deteriorated,” described Plus.

However, the needle-shaped tower that crowned the temple did not resist the flames and collapsed. It had been a bell tower during the seventeenth century, but now it was a tower with 500 tons of wood and 250 tons of lead at a height of 93 meters from the ground. It was accompanied by twelve green copper statues that, fortunately, escaped the disaster, having been moved for restoration only a week before. Two policemen and a firefighter were slightly injured during the works of extinction.

It is still early to assess the extent of the damage accurately, but the value of both what has been lost and what has survived is incalculable in terms of cultural heritage, given that Notre-Dame is one of the most important monuments of Europe. An open wound that now begins a long and arduous path if it wants to heal. And it can not be guaranteed that, even if it is cured, it will not continue to hurt.

The scope of the flames

An initial balance allows us to see the main materials affected are the restoration carried out in the nineteenth century by Viollet-le-Duc, one of the most important architects in France and the world. “Important elements of the building have been lost, such as the roof, which had an original beam structure of great value, and the needle is also an important loss, because it is an element that is already part of the history of the building, although it was added in 1859”, explains Miguel Angel Cajigal Vera, Historian of Art and member of ICOMOS (The International Council of Monuments and Sites). Inside the needle, in addition, there were three relics: one of the 70 thorns of the crown of Christ and other two relics of San Dionisio and Santa Genoveva. None seems to have survived. 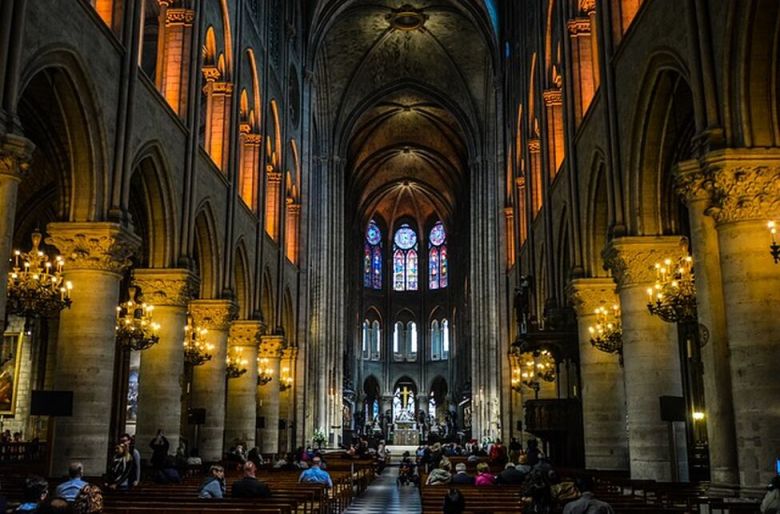 According to the French Minister of Culture, Franck Riester, a total of two-thirds of the roof has fallen, which is equivalent to about 1,000 square meters. Other damaged parts seemed to be the three rosettes that represented the flowers of paradise, built in the thirteenth century. Finally, as the politician has clarified, they have been affected without suffering “catastrophic damages”.

“Notre Dame, it’s to France, what the Cathedral is to Seville, the Mosque to Cordoba … is the heart of History and memory, hence the enormous suffering,” says Maria Dolores Ruiz de Lacanal, an expert in the History of Conservation and professor at the University of Seville.

“What we have lost is the symbolism of the noblest and famous French Gothic building”, told laments Javier Ribera Blanco, professor of History and Architectural Restoration and deputy director of the Cultural Heritage Institute. The expert adds that “Viollet-le-Duc was the greatest architect that France has ever had, it is he who introduces the architecture of iron and glass and is the great restorer of groups such as the French commune of Carcassonne”.

But not only must we take into account the damage of the flames, also that of the water. Although Donald Trump encouraged to use hydraulic planes to put out the fire, as Ribera points out, that would have caused “the water to enter under such pressure that it would end up destroying the organ, the vault and everything that was inside”.

Even so, and although there are no signs of collapse, Cajigal is worried about another aspect: the change in temperature. “The materials have been subjected to a huge and sudden heat and now they are going to cool down, these temperature changes are the key to see how they will resist,” says the expert, adding that “there is a well-developed methodology for this. it does not look like it’s going to be especially difficult, but obviously, it will be laborious”.

The Gothic lives, the fight continues

Twelve hours after the fire was declared, four hundred firefighters managed to extinguish it. Two policemen and a firefighter were slightly injured during the works of extinction, but among the ashes, there was still a lot of cultural heritage without damage or with irreparable damage.

The two 69-meter bell towers of the cathedral, jewels of Gothic art, remain intact. Of the three rosettes – thirteenth-century windows that represent the flowers of paradise – the north one is intact and the others are still being evaluated. The statues of the twelve apostles and the four evangelists surrounding the needle were not there during the fire. Also the Treasure of Notre-Dame, formed by the linen tunic of King San Luis, the crown of thorns and other relics of the Passion of Christ, which were extracted during the fire.

“You can see that the entire wooden structure has been consumed,” explains Ribera Blanco, “then, as they poured such amount of water, it has been able to drag something to the vaults, but they have managed to extinguish it before the embers fall down and damage all the goods there were,” sums up the deputy director of the Cultural Heritage Institute. “In that sense, fortunately, the cleanliness of the cathedral has allowed no longer spread the fire, but it has finished burning everything that was wood”.

“These buildings were designed to resist,” says Cajigal Vera. “Precisely they were vaulted in stone because the risk of fire was constant and the stone offers a fire safety that a wooden roof does not have”, explains the Art Historian. “In this sense, it is important to differentiate ‘roof’ from ‘roof’: the roof is what has burned, but the roof, which are the stone vaults, has not burned and has endured well, with exceptions of specific landslides, probably because of the weight of the needle when falling”.

“In the Middle Ages churches burned much more frequently than today and the devastating fires were part of the history of any cathedral,” adds the ICOMOS member. “Structurally, the Gothic is very rational, its balance and counter thrust makes the buildings very stable, if we consider that dozens of Gothic cathedrals reasonably withstood the Second World War, with bombings in their own compound, we see that it is no chance that the building has remained standing,” he says.

A restoration without a soul, but necessary

French President Emmanuel Macron undertook to rebuild Notre Dame as “a part of us”, but the next steps will not be entirely clear until the sequels are accurately assessed. “The important thing in the first weeks will be to consolidate the structure and ensure that everything that has not fallen remains where it is and does not pose a risk to people”, says Cajigal.

The speed with which it can be reconstructed will also depend on the budget available, something that, judging by the 600 million that the donations of several French billionaires already reach, does not seem to be a problem. “The money will help to rescue, but the pain of such a loss is irreparable, we understand our monuments with their historical, archaeological and documentary values,” says Ruíz de Lacanal.

The teacher takes the opportunity to make an appeal to acquire “the commitment to protect and protect the cultural legacy we have inherited”, since “it is time for professionals to prepare themselves to avoid other fires”. According to her, experts in cultural heritage “must be there, in every cathedral, in every monument, in every historical set, taking preventive measures, adjusting the degradation to the minimum”.

Nevertheless, Ribera emphasizes that this will be “a reconstruction without the soul of the old”, since, “there are fiction, a false history that must be done in order not to violate the memory”. The danger, according to the history professor, would be “to make a very violent innovation in a historical monument”, something that would not help to keep the balance between the new elements and those that have been saved from the fire.

However, not only with money will the cathedral rise. This also owes its life to those who, with a surgical job, played their lives more than forty meters high to keep the structure cool and prevent the fire from spreading. “Firefighters are the new ‘authors’ of the Notre-Dame cathedral, their names should be written alongside those of the Gothic builders,” the ICOMOS member of the saviors admires. “Together, with centuries of distance, they have managed to continue to exist today,” he concludes.

2019-04-17
Previous Post: 4 Ways To Make Email Marketing Boost Your Website’s SEO
Next Post: The 4 Most Popular Tourist Destinations in India