California, a disaster not so natural

It has only just begun. It did not even have to have started. California is prepared for a fire season that begins in late August and lasts until about October. This weekend, however, will have exceeded the 332,000 hectares burned in 2018. It is twice the amount burned at this point in 2017. Among other things, because last year the most serious fires occurred from October to January. There is no longer a fire season. It’s all year. 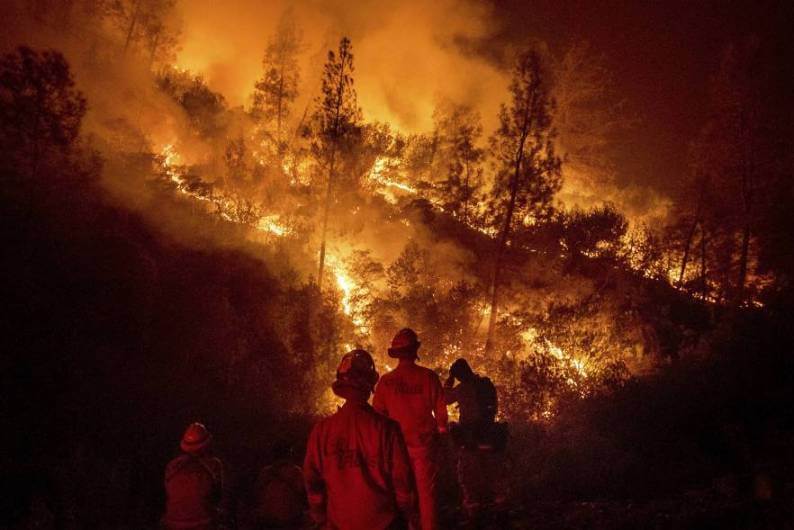 Two of the ten largest fires in history are active right now. The multiple Mendocino fire will not be completely controlled until September, the firefighters calculate. Mendocino is formed by two fires that surround an area of lakes and forests to two and a half hours by drive north of San Francisco. This week it broke the record of extension since records exist. The largest fire in California’s history will exceed 121,000 hectares this weekend. It is the size of a city like Los Angeles or Rio de Janeiro. The previous one was last year. Four of the five largest fires in California have occurred in the last decade.

The July and early August fires in California have left tens of thousands of people outside their homes. Only those evacuated by the so-called Carr fire, in the vicinity of Redding, north of the State, are estimated at about 37,000. It is the most destructive so far. It started on July 23 and until Saturday it had burned 1,077 houses and 500 other buildings. It is controlled by 55%. Mendocino’s gigantic multiple fire has destroyed only 139 houses. The most deadly fire in recent times was Santa Rosa, one hour north of San Francisco, in October of last year. Being 10 times smaller than Mendocino, it killed 22 people by devouring a whole neighborhood before it could be evacuated.

The governor of the State, the Democrat Jerry Brown, who promotes an aggressive policy of fight against climate change, repeated that it is about the “new normality”. I had already said it in December. “Over the next decade we will have more fire, more destruction, more billions spent”. Climate change has its part, experts say, but also mismanagement of forests, excessive colonization of the countryside and some bad luck.

Last January, a group of researchers from the University of California at Berkeley presented a study in which they claimed that the four years of drought (2011-2015) had left around 100 million dead trees in California. That is, a bonfire ready to be lit. “The current tree mortality is so great that there is great potential for massive fires in the coming decades”.

“Forests have become more dangerous because of the way they are managed”, Scott Stephens, professor of fire science at Berkeley and one of the authors of the study, explains in a telephone interview. Stephens refers to the policy of systematically shutting down any fire that occurs, which has been the standard in the way of acting up to now. “When the fires are extinguished, the forest continues to grow and there is more fuel in the ground. It is better to let fire enter the forest”.

The responsibility that can be attributed to climate change is that the summers are getting longer and hotter, that is, the conditions for all that burn each time are longer. “In July we had the September conditions” in terms of heat and dryness, says Stephens. “Normally the fires are in September and October. July is new territory”.

The brutal drought followed an unusually humid year, which caused the chaparral and grass to grow more than normal, and then a dry winter, that of 2017, which has turned all this into even more fuel. And now, we have to add a few months of June and July very hot for California. “We’re seeing a kind of perfect storm of drought, unprecedented heat, a lot of fuel and a lot of people living in wooded areas”, says Lenya Quinn-Davidson, a researcher at the University of California at Eureka. Quinn-Davidson does believe that the main change in the last decade is climate. “It is too hot. It does not cool enough at night anymore”.

Yana Valachovich, adviser on forests at the University of California at Eureka, blames especially the way to attack the fire, which “has accumulated fuel for 100 years” and the excessive urban development in the countryside. Human activity is the main cause of forest fires, intentional or not. The fire that killed more than 20 people in Santa Rosa last year was caused by a light pole. In addition, “it makes it harder to fight fire and cause good fires” that would help clean the forest.

This is the main point that the experts highlight. By extinguishing all fires systematically, nature does not do its job of cleaning the mountain from time to time. When a fire starts, especially in these “perfect storm” conditions, it becomes gigantic. That’s why they are getting bigger. “We have created our own problem and we must take responsibility. If you think about it, fire is the only natural disaster that we fight. With the others, we prepare and adapt. With fire we do the opposite”, says Quinn-Davidson. “I hope we can turn this into an opportunity”, adds Valachovic.

When the public was still digesting the Mendocino record, a new fire started in Southern California on Monday. The so-called Holy Fire began on a hillside in the Cleveland National Forest, an hour and a half to the southeast of Los Angeles. In just one week it has grown to 7,600 hectares and forced forced evacuations in nearby towns. It is controlled by 10%, continues to threaten homes and firefighters do not expect to have it surrounded until 15th August. In this case there is a detainee. A 51-year-old man who lived in a cabin in the woods and is accused of having initiated the fire intentionally.

California news shows images of postal suburbs bathed in pink retardant liquid strewn from a Boenig 747. Photos of the apocalyptic orange sky invade the networks. In full tourist, Yosemite National Park, one of the jewels of the State, has been closed for 20 days because another nearby fire makes it unbreathable and dangerous. The fire-fighting teams spend eight months deployed in the field instead of three, jumping from one end of the state to the other. 10 people have already died. The “new normality” is here.

2018-08-12
Previous Post: Bale and Asensio shine in Madrid’s victory against Juventus without Cristiano Ronaldo
Next Post: Fukushima removes the statue of a giant child with anti-radiation suit that makes its inhabitants uncomfortable