It happened last night on the comedy show “Jim Jefferies Show”, on the Comedy Central channel. And it was proven that Brad Pitt is a funny guy. 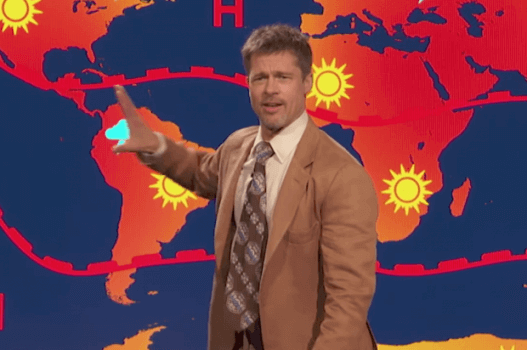 In a sketch on climate change, actor and ex-husband Angelina Jolie presented the weather forecast against a planisphere.

“A lot of heat around here, and a lot of heat over there”, he said on a world map boiling in furious orange.

Jefferies’ idea (along with Pitt) was to send a message to Donald Trump and his recent decision to lift the United States from the Paris agreement against climate change.

“Now of course the world is fighting against Trump’s decision to leave the Paris agreement, and we wanted to address the issue one more time before we said good-bye”, Jefferies said towards the end of the show.

“To help us understand climate change and what it means for the world, here is our own climate forecaster”, Jefferies continued.

On the screen then appears Pitt, dressed in style of 70, all tanned, with a huge brown tie, in front of a map in flames to present the prognosis.

“Things are going to get hotter in this area here, and in this area here”, he said pointing to the two halves of the planisphere. And when Jefferies asked, “Do you have any prognosis for us?” Pitt replied, “Yes, there is no future”.

2017-06-10
Previous Post: How To Revolutionise Your Supply Chain Management
Next Post: Donald Trump declares his assets for $1.4 billion