Five days after suffering a bleeding 4-0 against Paris Saint-Germain, Barcelona returned to the Spanish League and did so rescuing a victory shortly after the end. It was 2-1 over Leganes, at Camp Nou, with a double by Lionel Messi, who showed his dissatisfaction with team level and criticism, not celebrates any of these two achievements. 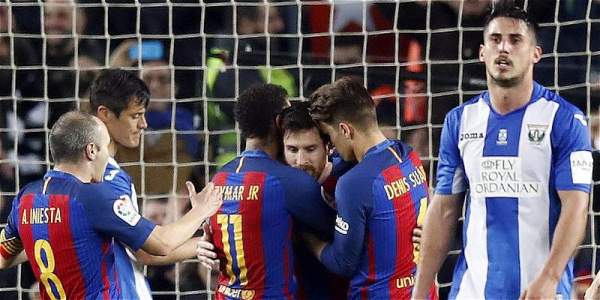 Messi’s first goal came in 3 minutes. Luis Suarez escaped unmarked on the left, came up to the bottom and sent a center with the inner side of his right leg that the Argentine pushed into the area. The Argentine hugged with Neymar, but with a clear dazed gesture.

It counted on a chance more Leo, with another hand to hand after the habilitation of Suarez. But Barcelona remained and Leganes managed to complicate and to make a figure to Ter Stegen. Of course, until the German could not contain a shot of Unai Lopez, after an incredible ball that lost Sergi Roberto at the start.

The relief of the team arrived at the closing. At 43, Neymar was knocked over in the area and the referee charged penalties. Almost without taking race, Messi hit a left-footed side with a stick and made it 2-1. Grateful gesture, despite the embrace of his companions.

Barcelona added an important victory, but not deserved, in a complicated moment. The Catalans come from falling 4-0 with PSG in the Champions League, a result that raised all kinds of criticism in Spain and the World.

With the victory, the team of Luis Enrique stayed one point less from Real Madrid, that counts with two games less. The Sevilla of Jorge Sampaoli follows third place.