Barcelona achieved a historic feat: Thrashed 6-1 to PSG and is in quarters

Shocking. Barcelona again wrote a historic page: after 0-4 against PSG in Paris, won 6-1 at the Camp Nou and qualified to the quarterfinals of the UEFA Champions League. Epic. It became 3-0 and caressed the feat, but deducted Edinson Cavani and seemed to bury the series. In the last seven minutes, the local got the three goals that they needed to pass the front on the key and unleash the madness of the Catalans. 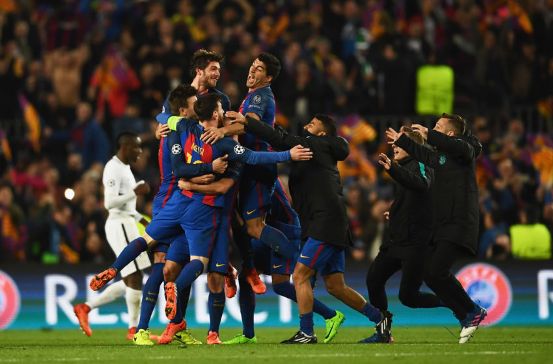 It could not begin better the Barcelona. It were two minutes only when Luis Suarez anticipated the goalkeeper Kevin Trapp and put the 1-0 at the Camp Nou for the home against PSG. It is that Lionel Messi’s team needs a feat if they want to progress to the quarter-finals of the European Champions League: they must overcome the 0-4 with which the French won in the first leg.

The match was as predictable: with the calm PSG and ready to counterattack, while Barcelona tried to break the bolt. Neymar well open to the left, Rafinha to the right; Messi free and Suarez in the area. More Iniesta and Busquets in the distribution along with Javier Mascherano who was joining this line from the side.

PSG defended with the eleven on the edge of the large area but managed to hurt with a couple of shots from outside the area (Neymar, Messi and Iniesta). And suffered when Draxler overflowed by left, Mascherano swept and the ball hit him in the hand. Also with a shot of Lucas that controlled Ter Stegen.

On the end of the first half, PSG left and left some spaces. Luis Suárez at 35, entered the area with the dominated ball, but his shot was simple for Trapp. The longer the clock ticked, the further the Barsa was to get the feat. But at 40, when the first time was extinguished, Iniesta generated space and passed; Neymar enabled it and the steering wheel was to Marquinhos, put an impossible block and Kurzawa scored 2-0 against his own fence. Barcelona came back to believe and PSG began to worry.

Again, Barcelona was pounding from the start. It was only 180 seconds when Neymar overflowed on the left, Thomas Meunier slipped and with his fall prevented the Brazilian, who exaggerated his landing in the area and Messi put the 3-0 from the twelve steps. The comeback was there, within reach of a hand.

But the illusion suffered after a hard blow: in the first clear move that had PSG, Edinson Cavani deducted with a right-hand shot in the area and the glass castle that had built the Barsa shattered in an instant.

But Barcelona achieved the feat within the feat. Because they needed to score three goals after the Uruguayan discount and got them in the last seven minutes of the game. First Neymar, with a spectacular free kick, put the 4-1. But the clock seemed to play against him. But German referee Deniz Aytekin won a penalty that left many doubts for a touch of Marquinhos on Luis Suarez. And Neymar, from the eleven meters, put again to Barcelona to shot.

It did not seem enough. That time was consumed and Barcelona was going to remain empty-handed. But Angel Di Maria took it down to Messi and even Ter Stegen was in the area. Rejected twice the visitors, a new foul in the middle of the field for the Barsa and again appeared Neymar to put the attendance and Sergi Roberto immortalized the day. Then, madness throughout the Camp Nou. Unforgettable.

2017-03-09
Previous Post: Angela Merkel on the Volkswagen scandal: “I did not know anything”
Next Post: An avalanche of garbage killed more than 50 people in a garbage dump in Ethiopia