Much more is expected from Gareth Bale at Real Madrid without Cristiano Ronaldo and the Welshman took a step forward on Saturday against Juventus, in the second match of the whites in the United States. At FedEx Field in Landover, Maryland, outside of Washington, Bale scored a great goal and was more active and accurate than four days ago against Manchester United, when Julen Lopetegui’s new team debuted with defeat (2-1). 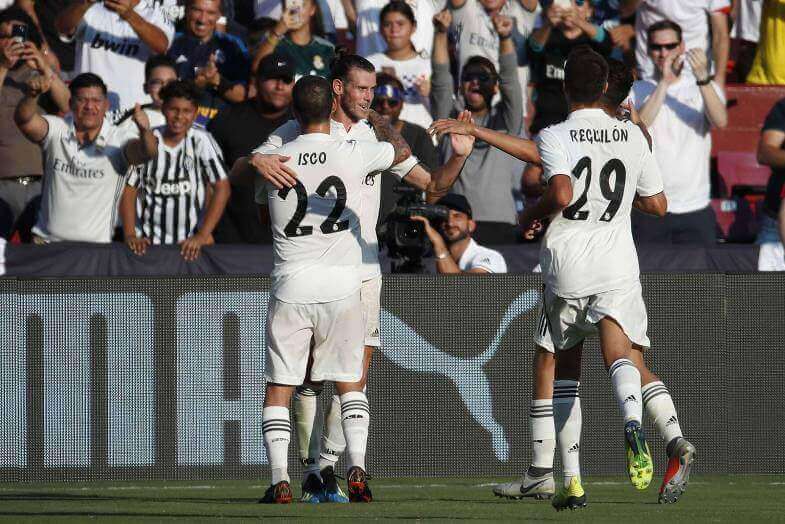 He also highlighted the connection between Marco Asensio and the Brazilian Vinicius Junior. Two goals from the Mallorcan managed to turn the score in the second half to seal the victory (3-1) against the Italians. The great absentee was Ronaldo, who does not participate in the US tour of Juve and avoided confronting his team for the first time.

Madrid picked up more pace in their second preseason game, which repeated the 2018 semi-final in the Champions League and the final of the previous year. A good partnership between Bale, Isco and Dani Ceballos was seen, which was the most outstanding against United in Miami and again gave good impressions to Juve. Vinicius Junior also shone in his second game with the meringues. His attacks by the left wing became a nightmare for the Italian defense. But the whites returned to exhibit some difficulties in the attack after the departure of Ronaldo and the absence of a clear substitute. Benzema was hardly seen in the 45 minutes he played.

Despite his absence, Ronaldo was the main character in the stands of the Redskins football stadium, which grazed everything. Many fans, mostly of Latin American origin, wore T-shirts – from Madrid and Juve – from Portuguese. The crowd was enthusiastic but the match started slowly. Under intense heat, both teams started very static and with little intensity, victims of the lack of rhythm in the pre-season.

Juventus were not expecting the goal in the 12th minute. After a cross from the Portuguese side Cancelo, who played for Valencia for three seasons, Carvajal cleared the ball back and scored an own goal to Keylor Navas’ goal. The goal encouraged both teams. The Italians gave some signs of danger, but the whites were gradually settling in the match until they almost completely dominated it. Bale chained a good play from the right, had a clear chance in the 24th minute and in the 38 did not fail: grabbed the ball after a rebound outside the area and released an unstoppable shot with a shot, straight to Szczesny’s squad. The Welshman would have another new opportunity with a free kick on the edge of the break.

In the intermission, Lopetegui took out Benzema, Isco and Bale. Asensio, Vinicius Junior and Lucas Vazquez entered. The partnership between the Mallorcan, who played false nine, and the Brazilian had a complete start: an approach of the end was topped by Asensio in the first minute of the second half. Ten minutes later, the second goal of Asensio would come on this occasion with a pass from Lucas Vazquez.

The duo Asensio-Vinicius Junior generated new opportunities, but as the second part progressed the game was diluted and Juve barely showed signs of danger. Towards the end of the meeting the show was given by the four spontaneous who jumped to the grass and tried, before the joy of the public, to outwit the police who ran for them.

2018-08-05
Previous Post: Everything that is known about the new iPhone
Next Post: California, a disaster not so natural