At least 48 people were killed on Thursday when a car charged with explosives exploded in a busy southern district of Baghdad. The attack, claimed by the self-styled Islamic state, is the deadliest attack since the beginning of this year and marks the third explosion of the last three days in the Iraqi capital in full offensive against the jihadist organization in the north of the country. 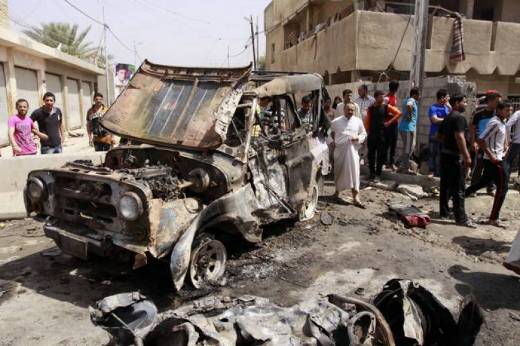 The carnage has occurred in the Baya district in an area plagued by garages and second-hand car dealerships. Police and medical sources have pointed out that the balance of victims could increase because, between the half hundreds of wounded, there are many in critical condition.

The first images broadcast on social networks show a succession of bodies charred by detonation and damage caused in nearby premises. IS (Islamic State) said the attack was targeted “a meeting of Shi’a”. The explosion took place in the same district where a car bomb killed four people on Tuesday.

Another 15 people were killed in a suicide car bomb attack on a street full of car dealerships in Sadr City, a district located in the east of Baghdad of Shia majority and where come from prominent pictures of Shi’a militias fighting the jihadists in Mosul, the second city of Iraq.

Two attacks suggest a new “modus operandi” of the group that leads by Abu Bakr al Bagdadi. In both cases, the extremists chose to camouflage their bomb vehicles in a car market. The IS, that three weeks ago lost eastern Mosul, is on the defensive and has resorted to attacks on the capital to avenge the military campaign begun in mid-October by Iraqi security forces with the support of the bombing of the international coalition that leads the United States.

The Deputy Commander of the Coalition, the British general Rupert Jones, admitted a scenario of attacks that will increase in response to pressure on his stronghold in Iraq. “There will be elements of the organization that will continue operating after the fall of Mosul, and we will continue to support a group that will go underground and act as it did over the years in Iraq. We have already seen the first signs of this strategy in the terrorist attacks that suffers Baghdad”, said the military.

Precisely, the year began with a brutal attack in a busy Baghdad square. At least 36 people were killed and 61 injured. “Terrorists will try to attack civilians to make up their losses, but we are sure that the Iraqi people and the world will be able to defeat terrorism”, Iraqi Prime Minister Haidar al Abadi said at that time. The organization has been reconciled with the tactics of insurgency of its genesis, al-Qaeda in Iraq.

This new attack on Baghdad coincides with a new blow to their organization chart. At least 13 Jihadist commanders were killed in an Iraq aviation attack during a group meeting in an Iraqi enclave border with Syria of which would have escaped with life the self-proclaimed caliph Abu Bakr al Bagdadi, last Monday reported the Iraqi armed forces.