At least 28 dead in attack on hotel in Mogadishu

At least 28 people have died and over 40 were injured in an assault perpetrated by a commando group Al Shabab in Dayah hotel of Mogadishu, government sources said. 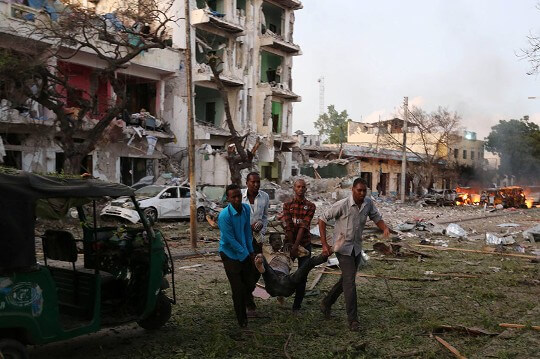 After the blast of a car bomb at the doors of this popular hotel, the attackers have accessed to the inside shooting indiscriminately and, minutes later, have detonated another bomb in the vicinity causing numerous victims, among them several journalists.

A Somali government minister that was inside the hotel at the time of the attack has reported that there were a large number of parliamentarians gathered inside due to the electoral process that is taking place in the country.

Al Shabab, subsidiary of Al-Qaida in Somalia, has claimed responsibility for this attack in Mogadishu, where in recent months has carried out numerous attacks that have killed dozens of civilians.

The hotels and restaurants of the capital have been a constant target of the group, which threatened to intensify attacks in the country during the presidential elections, postponed numerous times and still has been unable to carry out.

The United Nations Assistance Mission in Somalia (UNSOM) has condemned “strongly” the attack on their official Twitter account, which said that “violent extremists will never succeed in Somalia”.

2017-01-25
Previous Post: Trump signs the order to build the wall on the Mexican border
Next Post: The operation ends in the Rigopiano: 29 dead; 11 survivors