The Christian Democratic Union (CDU) of Angela Merkel today clearly prevailed in the Schleswig-Holstein regional elections to the Social Democratic Party of Martin Schulz in a new electoral test before the generals of September 24 in Germany, according to the first projections. 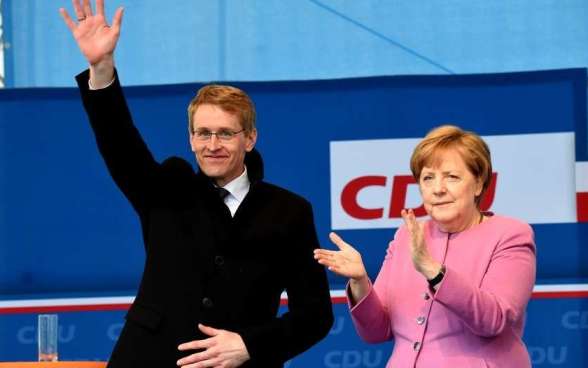 In the midst of the rise of the ultra-right in Europe and with the eyes set on the elections in neighboring France, Germany today also closely followed the fierce struggle between Merkel’s party and Schulz’s party in the small bordering land with Denmark in which 2.3 million people were called to choose the new configuration of the Kiel chamber.

According to the first projections of the German public television, the CDU obtained a 33.8% of the votes, against 26.7% that went to the hands of the SPD, that obtained its second worse electoral result in this federal state in its history from 25.4% in 2009, down from 27.5% in 1950.

This data augurs the end of the coalition government between Social Democrats, Greens and SSW (the party of the Danish and Frisian minority) led by the popular social-democrat Torsten Albig since 2012, who ceded the throne to the unknown candidate of the CDU, Daniel Gunther, who should now seek potential partners to govern.

As for the rest of the parties, the Greens and Free Democratic Party (FDP) achieved 12.7% and 10.7% respectively, and Alternative for Germany (AfD) would enter a new regional parliament with 5.5% of the votes.

With a provocative and xenophobic discourse, AfD would have achieved so as to enter in the twelfth regional Chamber of 16 which comprise Germany, on their way to the conquest of the Bundestag (Lower House), where it would disembark, according to the latest polls, with a nine or ten percent of the vote.

The change of government in Kiel gives a new impetus to Merkel in the face of the generals, since in its 11 years and a half of government has lost six federal states, but had not succeeded up to now be done with any new ones.

On the contrary, for the SPD, which managed to rise at the outset in the polls thanks to the election of the former president of the European Parliament as leader and rival of Merkel in the general, the results are the second blow this year.

Schulz, who dreams of ending Merkel’s “reign”, who will fight in September for a fourth term, has not yet been able to prevail in any regional test. In the first, last March in the State of Saarland, the CDU maintained his power and improved the outcome of previous elections even at five points.

The next challenge for Merkel and Schulz is already just around the corner in next Sunday’s elections in North Rhine-Westphalia, the largest German state and the last to hold regional elections before the generals.

In this state live about a quarter of all Germans with the right to vote and is seen as a general test in the face of the meeting on September 24.

2017-05-07
Previous Post: The U.S. unemployment falls to its lowest level in a decade
Next Post: The candidates of Donald Trump to lead the FBI