In the laboratory, the water can be cooled to below zero degrees Celsius without freezing. Theoretically up to 48 degrees below zero, if it is completely free of impurities, but nobody has reached that figure. At such low temperatures, H2 molecules or they lose energy and begin to sort in tetrahedrons, so that the minimum contact with a surface or the presence of a tiny particle that acts as a nucleus precipitate the sudden formation of a crystalline structure: ice. 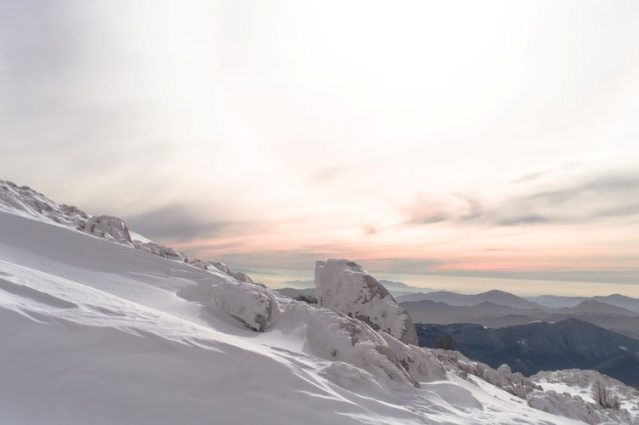 Those who study this phenomenon call “the no-man’s land” the liquid phase of water below -40ºC, due to the difficulty of accessing it experimentally. Now, an international team of physicists has managed to cool liquid water to 43 degree below zero, and demonstrates it with a very precise original method to measure temperature.

The study, which appears in the latest issue of Physical Review Letters, is not a mere pastime. Subcooled water – as it is called when it remains in a liquid state below the freezing point – exists in nature, and its presence influences the amount of solar radiation absorbed by the Earth. “There are tiny drops of subcooled water at temperatures that reach 238 K [about -35° C] in the highest clouds in the atmosphere. An accurate description of the formation of atmospheric ice could help develop more reliable climate models”, the authors write.

For the experiment they injected a thin thread of pure water into a vacuum chamber. By agitating the nozzle of the source with a certain frequency, the water train breaks into identical droplets, about six micrometer in diameter. As it travel through the chamber, at 72 kilometers per hour, the drops are reduced by evaporation surface. As this happens at the expense of the thermal energy enclosed in the water, the temperature of the drops decreases dramatically as it lose volume. Thus, the liquid that entered room temperature reaches 43 degree below zero in just a few centimeters of travel. Finally it freezes, before hitting the wall of the camera.

The scientists calculated the temperature of the droplets at each point along the way – with an error of 0.6 degree – by illuminating them with a focused laser beam and analyzing the spectrum of light scattered by the water. Drops of liquid water are perfect spheres due to its surface tension; this causes them to amplify certain light frequencies (which are resonant with its diameter) but not others, giving typical peaks in the scattering spectrum that make it feasible to calculate its very precise dimension. “By the size we know how much water is evaporating, and with this we have known the cooling that has had to occur”, explains the researcher of the Institute of the Structure of Matter (IEM-CSIC).

When the peaks disappear from the light spectrum, scientists know that the water has frozen, because the crystalline structure of the ice produces fractures and polyhedral faces in the sphere that break the resonance of the light waves. “Water is a liquid with very anomalous properties due to the structure of hydrogen bridges that is formed between molecules”, researcher says, “but no detailed explanation is available at the molecular level”. These hydrogen bridges are those that allow water to be liquid at room temperature when, due to the position of its elements (oxygen and hydrogen) in the periodic table, one would expect it to be gas, such as ammonia (NH3) or acid hydrogen sulphide (H2S).

The study of sub-cooled water aims to clarify the nature of these molecular structures, which give H2O the extraordinary characteristics that allow life on Earth. Among its “anomalous” properties, water is a virtually unique substance because it is less dense in a solid than liquid state, which has allowed to preserve life under the icy surfaces of large bodies of water during glaciations. It also affects terrestrial life because the ice that floats over the oceans hardly changes the sea level.

2018-01-18
Previous Post: Turkish plane falls down with 162 passengers
Next Post: Saudi Arabia affirms that it has raised 86,000 million in the anti-corruption purge