A Palestinian shoots three Israeli agents in a settlement near Jerusalem

In the most serious attack in three months, a Palestinian gunman shot dead two Israeli security guards and a 20-year border police sergeant at the settlement of Har Adar, (occupied West Bank), with 4,000 inhabitants and located 15 kilometers northwest of Jerusalem. A 32-year-old Israeli quarter was seriously wounded by gunshot wounds. 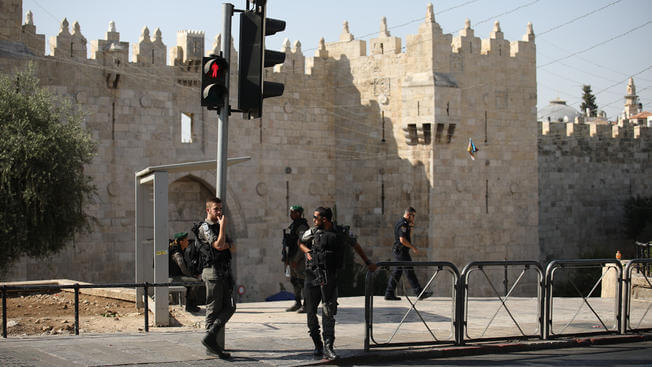 “A terrorist who arrived at Har Adar’s subsequent access shot at the security forces at the scene when he was to be identified by his suspicious clothing,” a police statement said. The attacker, who sought to infiltrate the colony among a group of Palestinian workers, was gunned down by other agents and died shortly thereafter. He has been identified as Nimer Jabar, 37. He came from the village of Beit Surik, in the vicinity of Har Adar, where he lived with his wife and four children. The entrances to the village were immediately blocked by the army. Jabar had a work permit in Israel and had not been considered dangerous by the Shin Bet (Israeli internal security service).

A spokesman for the Islamist organization Hamas said the attack was “a new chapter of the Al Quds intifada (Jerusalem, in Arabic) against attempts to judaize a city that is both Arab and Islamic”. The attack coincides with the start of a new diplomatic round by US mediator Jason Greenblatt, with the aim of reviving the negotiations between Israelis and Palestinians, suspended since April 2014.

More than 40,000 Palestinians come every day to work with an official permit to Israeli territory or companies located in the West Bank colonies. Civilian and military security services have urged the government of Prime Minister Benjamin Netanyahu to increase the number of work permits to improve the economy and security in the occupied Palestinian territory for 50 years.

After a period of relative calm, this attack again triggers the alarms in full celebration of the Jewish New Year festivities (last week), Yom Kippur or Repentance (this weekend) and the Feast of Tabernacles, one at which time attacks have traditionally been recorded. Last July, a Palestinian stabbed three members of a Jewish family to death in the West Bank settlement of Halamish.

It is now precisely the second anniversary of the beginning of a wave of violence – the largest since the Second Intifada (2000-2005) – which has killed 50 Israelis, 7 foreigners and 295 Palestinians, two-thirds of whom were killed by the security forces for security by being considered. Gun attacks have been infrequent. In most cases, the aggressors – considered solitary wolves without relation to terrorist organizations – used white arms or vehicles.

2017-09-26
Previous Post: More than 220 killed in a strong earthquake at Mexico
Next Post: Austria bans ‘burqa’ in full immigration debate