A court in the Pakistani city of Peshawar has refused to grant bail to Sharbat Gula, the Afghan woman who starred as a child the iconic cover of National Geographic 31 years ago and who is detained for alleged illegal possession of an identity document. 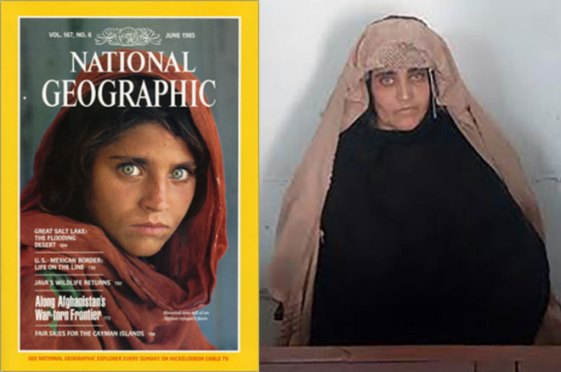 “The court has rejected the bail. The judge has given no explanation yet why. We are waiting for the document of the judgment,” said Mohsin Dawar, one of the three lawyers hired by the Afghan Government for the defense of the refugee. The lawyer said they would appeal the decision to the High Court of Peshawar.

Gula was arrested on 26 October for allegedly obtaining Pakistani documents identity for herself and two of her three children after bribing officials, and faces 14 years in prison.

The American photographer Steve McCurry immortalized the Afghan in 1984, when she was 12 years old in a refugee camp in the Pakistani city of Peshawar (northwest), photograph that would be published a year after becoming one of the most iconic images of the twentieth century.

The lawyers asked this Tuesday for the freedom on bail for the 46-year-old accused, for humanitarian reasons, since her suffering from hepatitis C, have no criminal record and have young children “who cannot live without her”.

The Afghanistan’s ambassador in Islamabad, Omar Zakhilwal, asked after the arrest of Gula on the Pakistani authorities to release the woman because of the damage that her detention to relations between people of the two countries and weakness, in his opinion, the case against her.

According to the diplomat, Pakistani identity of gluttony was not obtained illegally as stated by the police, but it was legally issued by the authorities, as well as of other 500,000 Afghans in the country.

In response, the head of the Pakistani diplomacy, Sartaj Aziz, said that his government “would work” to release her, while Interior Minister, Nisar Ali Khan said that he had asked the Federal Investigation Agency to be released her on parole.

After the arrest of the so-called “Mona Lisa of Afghanistan,” McCurry promised to “do everything I can to help her legally and financially”.

Gula’s face wrapped in a red scarf and green eyes became powerful image of the girl in an icon of contemporary photography. McCurry returned to photograph Gula 17 years later in Afghanistan and discovered that the woman, who was then 30 years old, did not know her international fame.

2016-11-02
Previous Post: China modernizes their Air Force with the presentation of fighter J-20
Next Post: Two police officers killed in two attacks by surprise in Iowa