At least 75 people have been killed and six injured in the crash of the plane that was carrying the Chapecoense Brazilian football team, which has crashed in Cerro Gordo of the Union, in the department of Antioquia in Colombia, according to latest data provided by the president of Colombia, Juan Manuel Santos. 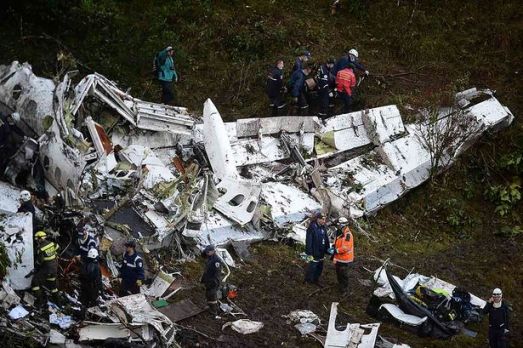 The crashed aircraft company Lamia, has come from Bolivia and has crashed in the area of Cerro Gordo of the Union, between the municipalities of La Union and La Ceja (Antioquia department, both near Rionegro, where is located the Jose Maria Cordoba airport) with 81 people on board. The plane was carrying members of the Brazilian Chapecoense football team.

The president of Colombia, Juan Manuel Santos, has confirmed that two of the six plane crash survivors are serious. “A unified command position was established to set priority to search and rescue survivors. This work allowed the rescue of six people treated in the hospital, two of them are serious “, said Santos.

The director of the Administrative Department of the Prevention System, Care and Disaster Recovery of Antioquia, Mauricio Parodi, said that the plane came from Viru Viru airport in Santa Cruz de la Sierra (Bolivia), where apparently had made a technical scale.

According to the Civil Aeronautics of Colombia, in addition to the 22 players of the Chapecoense on the plane traveling 28 leaders, members of the coaching staff and special guests of the Brazilian club, as well as 22 journalists and nine crew.

The Brazilian president has said that the Government is putting “all means” to “assist the family” of the victims of the incident and give them “all possible assistance”. “The Government will do all the possible to relieve the pain of the friends and relatives of the sport and the national journalism”, he said.

2016-11-29
Previous Post: Fidel Castro dies at age 90
Next Post: The president of South Korea is willing to resign if Parliament wants