38 civilians killed in two days by attacks in Aleppo, Syria

The fighting between the Syrian regime and rebels continued Sunday in the western suburbs of Aleppo (northern Syria), where 38 civilians were killed in two days by firing rockets of the insurgency, according to the Syrian Observatory for Human Rights (OSDH). 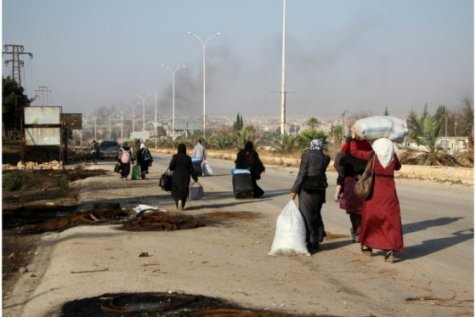 The victims included 14 children, said OSDH. About 250 civilians were wounded in massive bombardments of anti-government factions since Friday morning, said the Observatory.

The Rebels Syrians and their allies launched a major offensive to break the siege imposed by the regime of Damascus from three months ago in the eastern suburbs of Aleppo, where live approximately 250,000 people.

From 2012, the second city in Syria is divided between rebel neighborhoods of the East, in the hands of the insurgents, and controlled by the regime of Bashar Al-Assad, in the West.

“Rebel fighters launched hundreds of rockets and mortar shells into the western neighborhoods from positions inside the city and its western margins”, said the director of the Observatory, Rami Abdel Rahman.

According to him, the rebels tried to advance in the east of the district of Dahiyat Al-Assad, of which they conquered the greater part on the first day of the offensive, toward Hamdaniyeh, an area controlled by the regime, stuck to those who are in the hands of the opposition.

The fighting lasted all night until Sunday morning. The aerial bombardments and artillery fire were heard in the eastern suburbs, according to an AFP correspondent.

Since Friday, more than 1,500 fighters arrived from the provinces of Aleppo and Idlib (northwest) involved in the offensive. Among them are jihadists from Front Fateh al Sham, former Al-Nusra Front, who broke ties with Al Qaeda.

2016-10-30
Previous Post: Google artificial intelligence have learned to keep secrets
Next Post: Guide to follow the new emails scandal of Hillary Clinton investigated by the FBI